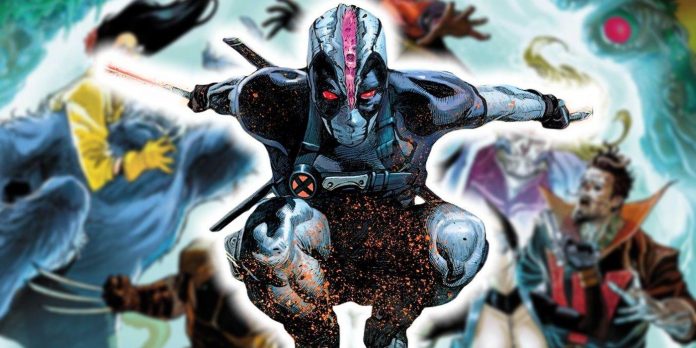 Warning: Spoilers ahead for Wolverine #23

After months (and months) of Deadpool literally begging Wolverine to let him join the newest iteration of X-Force Krakoa, Logan finally gave an extended invitation to a desperate Wade. Deadpool has a long and complicated history with the X-Men and the X-Force team in general, but he recently proved that despite his excessive behavior, he is an important asset to the Krakoa team.

Deadpool, created as a 1990s peak supervillain by Fabian Niceza and Rob Lifeld for New Mutants #98, quickly became an enemy of the 90s X-Force team before moving on to his more modern concept of an antihero, the 4th wall-breaking assassin obsessed with being considered part of the X-Men. Although Deadpool was not directly involved in X-Force for many years, he was a major contributor to the book Uncanny X-Force, written by Rick Remender, under the direction of Wolverine, and has been trying to reconnect with the mutant community ever since.

Since his time in Uncanny X-Force, Wade Wilson has been desperately trying to get Wolverine to quit the X-Men and become a partner with him or get him to invite Deadpool to join the newest iteration of X-Force. Since the Krakoan era, the status of Deadpool’s possible mutant personality has been hotly disputed, but it seems that it no longer matters whether he has the X gene or not. The last few issues of Wolverine — a solo series about Logan in the era of Krakoa, written by Benjamin Percy with illustrations by Adam Kubert — Deadpool forced Wolverine to team up with him, trying to convince him that they would work well together if Logan decided to quit X-Men. Wolverine #23 sees Logan and Wade infiltrate Xavier’s old, abandoned School for gifted Mutants to capture, destroy, or decommission a sentient version of the X-Men’s Danger Room. The reason Danger hates the X-Men and wants to see them killed is true, given that they abandoned her and imprisoned her mutant lover Madison Jeffries in a Pit, but Deadpool clearly feels that she is actually just attacking them out of grief and despair.

After he decided to spare Danger and her robot daughter by telling Blind Al, “She’s a sad monster. I sympathize with the sad monster,” it seems that the days of Deadpool and Wolverine working together are over… except that Wade only has one more job to offer he needs to check out. On Krakoa, the X-Force team consisting of Wolverine, Beast, Sage Domino and Red Omega (after the recent death and erasure of Quentin Quire from Cerebro) meet to discuss their next mission when Deadpool appears behind them, looking meek. Wolverine finally invites Deadpool to join them with a smile, and the announcement on the last page announces that Deadpool will return in the upcoming X-Force #30, which is part of the upcoming AXE: Judgment Day event. It’s a touching moment when Logan clearly recognizes the skills and heart that Deadpool brings to the partnership, and the team proven that he doesn’t kill Danger and helps Wolverine recover the stolen hand from Dolores Ramirez of the CIA. After all, Deadpool is the perfect Marvel character for the immoral and violent X—Force team, regardless of whether he was born with the X gene or not, so Wolverine’s decision is finally to invite Wade into their ranks. it makes a lot of sense to consider.

Wolverine, who has always respected Deadpool’s psychotic strategic abilities, is ideally suited to lead Wade as he has years of experience working with him, which keeps him on a short but useful leash. Hopefully Deadpool, finally invited by Wolverine to join X-Force, will give the team the edge they need to defeat Kraven the Hunter in their next big battle.

Netflix Announces It Wants To Turn Squid Game Into A Video...