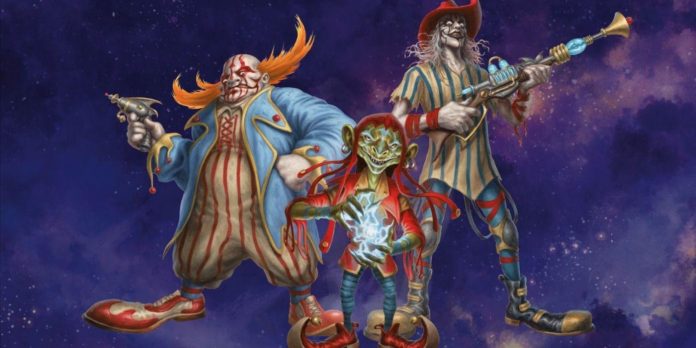 The disturbing origins of clowns in the Dungeons & Dragons multiverse have been revealed, and it turns out that demonic clowns from outer space are involved. D&D offered players the opportunity to play as clowns in older versions of the game, in the form of a Jester set for bards in AD&D and a bard-like Jester base class in D&D 3e, with bad jokes and fooling enhanced by magic.

The Spelljammer campaign settings for D&D will be updated to 5e in the upcoming Spelljammer: Adventures in Space set. Spelljammer is a mix of fantasy and science fiction in which players use magical sailing ships to explore the universe. The old version of Spelljammer had elements of cosmic horror, but it also had its own wacky content, since it was in this setting that giant D&D space hamsters were introduced, which were bred to run around in giant wheels driving the spelljammer ships used by the gnomes of Krynn. . The new version of Spelljammer from D&D will retain this mixture of comedy and horror, as this is in many ways the essence of D&D, since most games never stay in the same genre for long.

Spelljammer is also home to roving gangs of space clowns who travel the wild cosmos in spelljammer ships with huge pie launchers. In a video on the official Dungeons & Dragons YouTube channel, it was shown that space clowns are a source of inspiration for the clowns of the D&D multiverse. This is due to the fact that space clowns visit the worlds of the D&D campaign and leave their mark on their inhabitants.

Surprisingly, Spelljammer’s space clowns are classified as Fiends, which puts them in the same category as demons and devils. They come from a place called Clown Space, which contains three ring-shaped worlds. It remains to be seen whether players will be able to visit the Clown Space in the upcoming Spelljammer: Adventures in Space, or they will even want to, since for most people one scary clown is enough, and a whole sector of space will simply be superfluous.

The concept of spellcasters filled with demonic space clowns may seem too silly for some Masters, especially for those who got acquainted with the concept of the Spelljammer through the terrifying Nautiloid mind eaters ship in Baldur’s Gate 3. The comedic elements of the Spelljammer are just as important as the bodily horror and darkness inhabiting outer space, as this is the key to the identity of the setting. D&D groups who don’t want to fight intergalactic sailing ships full of clowns will miss out on what makes Spelljammer so great, as they are perfect for giant space hamsters D&D.

Battlefield 2042 Details Its Most Recent Changes