Home Entertainment D&D Characters: Forgotten Realms, the Most (and Least) Important to the story 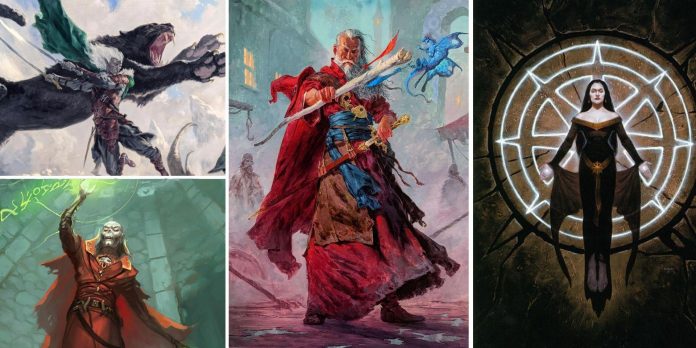 The Forgotten Realms, a fictional planet of heroic fantasy initially created by Ed Greenwood, has become an official Dungeons & Dragons campaign world in the 1980s and has since become the primary campaign setting for 5th edition D&D modules and video game adaptations such as the Baldur’s Gate series. The sourcebooks and licensed fantasy novels set in the Forgotten Realms have also introduced a numbers of influential, lore-defining characters to the Dungeons & Dragons multiverse, ranging from the eccentric world-hopping wizard Elminster to the heroic Drow Ranger Drizzt Do’Urden, who single-handedly made dark elf player characters a viable option in D&D campaigns.

As mentioned above, author/game designer Ed Greenwood came up with the Forgotten Realms fantasy setting long before adapting it to the group gameplay of Dungeons & Dragons. The name of the setting, Forgotten Realms, is derived from the idea that the fantasy planet of Abeir-Toril and the magic-filled continent of Faerûn were once connected via portals to Earth itself. The history of the Forgotten Realms is full of cataclysmic god wars, fallen empires, and magical apocalypses, resulting in a world full of ancient ruins and scattered city states between large stretches of abandoned wilderness – the perfect setting, in other words, for the classic D&D adventuring party.

Over the decades and various editions of the world’s first roleplaying game, Forgotten Realms has become the default Dungeons & Dragons fantasy campaign setting for scenarios described in D&D rulebooks and popular video game adaptations such as Bioware’s Baldur’s Gate and Neverwinter Nights RPGs. The popularity of this fantasy setting owes a lot to vivid locales like the fractious cities of Baldur’s Gate and Waterdeep and memorable world-changing heroes and villains such as a certain scimitar-wielding, panther-summoning Ranger of the North.

As the most famous and popular character created by Forgotten Realms novelist R.A. Salvatore, Drizzt Do’Urden, the heroic Ranger of Icewind Dale, popularized the archetype of brooding scimitar-wielding warrior characters among Dungeons & Dragons players and transformed how the “Drow” species was portrayed in D&D publications. Raised in the Underdark city of Menzoberranzan among a culture of bloodthirsty, power-hungry dark elves, Drizzt broke away from the evil ways of his kindred, eventually making his way to the surface and learning the ways of the Ranger. With his twin scimitars and panther companion Guenhwyvar, Drizzt and his companions ventured across the northern lands of Icewind Dale, fighting demons, warlords, and wielding of dark magic to protect people who often rejected Drizzt for his origins. Over time, the popularity of Drizzt Do’Urden led to a change in Dungeons & Dragons rules for Drow or Dark Elves – rather than being an innately evil monster species exclusive to the Monster Manual, Drow became a variant of the Elf race that players could pick during character creation.

The Many Incarnations Of Mystra, Goddess Of D&D Magic

All the gods and goddesses of the Forgotten Realms are vital to the setting’s lore, having created the world of Abeir-Toril in the distant past while also granting divine powers to their chosen clerics in the present. Mystra, Goddess Of Magic, is a particularly important deity in many Forgotten Realms stories and campaign modules by virtue of how she regulates the magical Weave Dungeons & Dragons wizards use to cast spells. Mystra’s existence also governs the stability and safety of magic in the Forgotten Realms, each new change in the functionality and form of spell-casting heralded by her death and reincarnation.

Related: D&D Campaign Ideas For Parties With No Magic Users

Her first incarnation, originally called Mystryl, sacrificed her life to stop the hubris-driven ambitions of the arch-wizard Karsus from destroying all magic forever. In her second incarnation, Mystra imposed harsher restrictions on what arcane magic could and couldn’t do, occasionally choosing an ambitious wizard like Elminister to be her champion. After the second incarnation of Mystra died during the Time of Troubles, a wizard named Midnight ascended to take Mystra’s place. When the third incarnation of Mystra was murdered by the evil gods Cyric and Shar, the Weave of Magic iconic to D&D lore started to fray, leading to a cataclysm called the Spellplague where arcane magic started to malfunction and surges of wild magic reshaped both the lands of Faerûn and other realms in the Dungeons & Dragons multiverse.

Elminster Aumar, the chosen Magister of Mystra, is canonically one of the most powerful and ancient mages in all the Forgotten Realms, As a supremely eccentric sage with phenomenal cosmic powers, a love of guile, a trove of magical artifacts, a thousand-year lifespan, and a close friendship with Mordenkainen and other epic book-learned D&D wizards in the Dungeons & Dragons multiverse, Elminster has shown up as a supporting character, protagonist, and trickster mentor in many of the Forgotten Realms novels published by setting creator Ed Greenwood, working in public and behind the scenes to protect his world, safeguard the peace and liberty Faerûn’s people, and pursue his many personal vices and whims. In some licensed D&D novels, Elminster even acts as an epistolary figure, teleporting into the home of Ed Greenwood and sharing new tales about the deeds and developments in the Forgotten Realms.

There are no shortage of evil wizards and undead Lichs like the D&D’s iconic, powerful Vecna in the Forgotten Realms, each one invariably seeking eternal life and unlimited arcane power. Szass Tam, a Lich and Red Wizard of Thay, shares the ambitions of his power-hungry colleagues, but has so far avoided the fate of most evil undead wizards thanks to his reserves of patience, inclination to reward loyalty, and willingness to play the long game. From the 3rd edition of Dungeons & Dragons onwards, Szass canonically became the absolute ruler of his homeland of Thay, a country ruled by cabals of ruthless Red Wizard and built on the back of undead legions and rampant slavery. Within his necromantic domain, Szass methodically consolidates his political authority, eliminates his rivals in the noble hierarchy of Thay, enriched his country’s coffers with a steady export of minor but useful D&D magical items, and schemes to acquire absolute power, and pursue the usual undead wizards scheming of knowledge and magical power at a leisurely pace.

Fallout 76 Will Be Invaded By Aliens In The Spring