Home Entertainment D&D 5e Content to Watch Out For is nominated for an Annie... 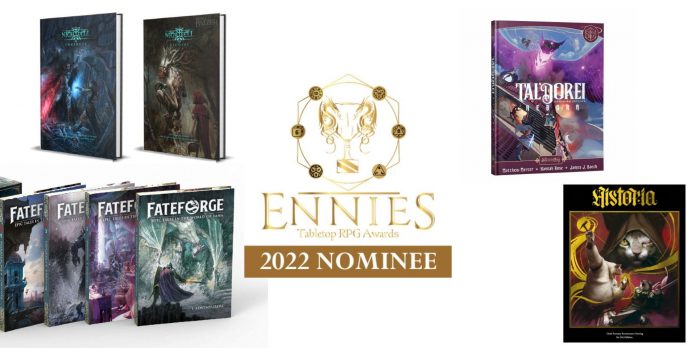 Ennies 2022 — an annual Oscar—style event that awards creators of excellent content for tabletop role-playing games – is in full swing. Products for Dungeons & Dragons and many other role-playing games have been nominated in certain award categories, and the winner among these finalists, voted for by the gaming community, will be announced at the official Ennies awards ceremony in August 2022. Fans of D&D 5th Edition should pay particular attention to the following nominations, each of which is designed to expand or transform the experience of running campaigns with 5e rules.

In addition to D&D compatible content, there are many RPG products nominated for the Ennie Awards. Only in 2022, content for games such as the fantasy role-playing game about the doomed world of MÖRK BORG, the fantasy LGBT game Thirsty Sword Lesbians and peaceful role-playing games in the style of Wind In the Willows, such as Wanderhome, were nominated in categories such as “Best Game”, “Best Art”. /Cover or Best Help/Accessory.

By topic: Board role-playing games about doomed heroes and doomed worlds

Most of the Ennie—nominated D&D products listed below are D&D 5e publications created by third-party game designers and dungeon creators who have used the 5th Edition System Reference Document published by Wizards Of The Coast under the Open Gaming license. Among these products are vividly drawn fantasy game sets, bestiaries of new monsters/challenges, and even creative rules that players can use to spice up or even hack their D&D RPG gaming experience.

The D&D 5e Historia setting Guide, which is sold on Drivethru RPG and published by Mana Project Studio, was nominated for the Ennie Awards in the categories “Best Art”, “Interior” and “Best Setting”. The fantasy world described in this handbook is similar to the Pugmire role-playing game system, is inhabited by anthropomorphic animal people and possesses the technologies and cultures of Renaissance Europe. The tone of this fantasy setting focuses on gallant adventures and sinister intrigues, while the text of the handbook contains rules for new character classes, new archetypes of animal species, and even rules for faction-oriented gameplay and the use of antique firearms.

Nightfell — Bestiary For D&D 5e, nominated for the Ennies 2022 Best Monster/Opponent Award, is a catalog of new monster designs that dungeon masters can hurl at their players. However, that’s not all; it’s also a book about the setting, depicting a fantasy world where the sun is dead and the moon is the only source of light, and survivors in this dark world are attacked at every turn by the calamities of the undead and ancient horrors. The tone of the Nightfell setting seems to be heavily inspired by classic tales of vanishing worlds, such as Jack Vance’s The Dying Earth and William Hope Hodgson’s The Land of Night, while descriptions of monsters evoke supernatural nightmares not too dissimilar to Bloodborne. invincible video game beasts and space relatives.

The book “The Revival of the setting of the Tal campaign’Dorai”, nominated this year for the Annie Award for Best Setting, is a reference book full of world-building details, plot clues and blocks of creature characteristics for the fantasy continent of Tal’Dorai, the setting for the first season of the series “Critical Role-playing Game”. Published by Darrington Press, this volume, compatible with the 5th edition of Dungeons & Dragons, allows role players and fans of Actual Play to explore the world of Exandria two decades after the voyages of the Vox Machina adventure group. The book “The Rebirth of the Tal Campaign Setting’Dorai” immerses players in the iconic places of the Exandria Critical Role setting, such as the cities of Whitestone and Wasselheim, discovers subclasses characteristic of the setting, and offers mastery of the use of legendary artifacts known as “Remnants of Divergence”.

Related: Excellent D&D Settings That are Not Published by Wizards Of The Coast

Published by the French studio Agate, the Fateforge: Tetralogy Box Set is a set of basic books for the Fateforge Dungeons & Dragons fantasy setting. The plot of Fateforge, nominated for the Annie Award for Best Screenplay, immerses players in the world of sword and sorcery, full of diverse civilizations. Fateforge presents unique views on the classic non-human races of D&D, as well as plot clues such as a source of corruption called Ulcer, ancient portals left by people called Wanderers, and Fate as a real force interfering in people’s lives. Fateforge: Tetralogy Box Set also contains a customized RPG system based on D&D 5th Edition SRD, containing new character creation rules and a brand new magic system that gives narrative weight to each new spell learned.

The RDR2 player has just solved the biggest mystery of the...

What Ethan Plath posted on Instagram ahead of Season 4