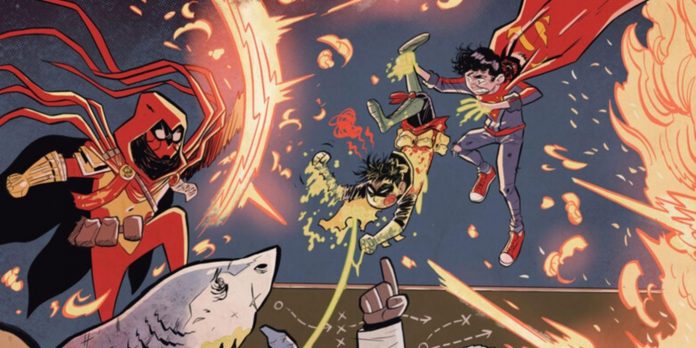 The Super Sons are putting together a band again so that Robin, Superboy and the entire DC universe can go back to school. DC has unveiled a new anthology that promises the return of some fan-favorite characters for a fun send-off in the summer just in time for the first lesson.

Of all the changes to the DCU during the “Renaissance” period, one of the most favorite things that appeared as a result of the update was Super Sons, a team comic featuring Batman’s son, Damian Wayne, and Superman’s son, John Kent. While the two began their collaboration on rocky ground, Robin and Superboy became good friends and even the best partners in the fight against crime. Despite the acclaim of critics and fans of this title, the time of the shining Super Sons ended when John Kent aged a few years, later taking his father’s place as Superman of Earth.

Although John and Damian are still friends, there is still a significant audience that is eager to see more adventures of Super Sons. And those fans are getting exactly what they want, thanks to a new anthology from DC. The publisher announced that as soon as the summer comes to an end, they will release “Saved by Belle Reve No. 1” DC. Super Sons will return triumphantly in a new story written by Peter Tomasi and illustrated by Max Raynor. Robin and Superboy aren’t the only fan favorites getting more time in the spotlight, as DC described the one-off anthology as a “Who’s Who of the creators and characters you’ve been asking to See More of!” Becky Cloonan, Brenden Fletcher, Karl Kerschl and Msassikare return to create a new Gotham Academy story, while how Art Balthazar and Franco tell eager readers a new story about Tiny Titans.

DC clearly knows what they’re doing with this anthology. The inclusion of characters like Super Sons and the cast of Gotham Academy is a chance to provide readers with the most in—demand fans in one place. While fans would no doubt prefer these main characters to return in their own games, a themed story is better than nothing. In fact, an anthology filled with favorite characters can be a good omen for long-absent favorites.

While it’s hard to predict which characters and stories will become preferred among fans, it’s usually pretty obvious when something resonates with readers. Things like Super Sons and Gotham Academy were a fun alternative to the standard superhero stories from the DC universe. Unfortunately, the love of fans does not always guarantee success. However, enough noise can show publishers that there is a demand for fan favorites, and with luck, things like the new DC anthology may bring readers exactly what they’ve been waiting for. Does this mean that with enough sales, fans will be able to see more of their favorite stories? Not quite. But the book provides an opportunity to prove that the market for these characters still exists. Those who desperately want to see more of Robin and Superboy as Super Sons should consider buying a copy of DC Saved by the Belle Reve #1.