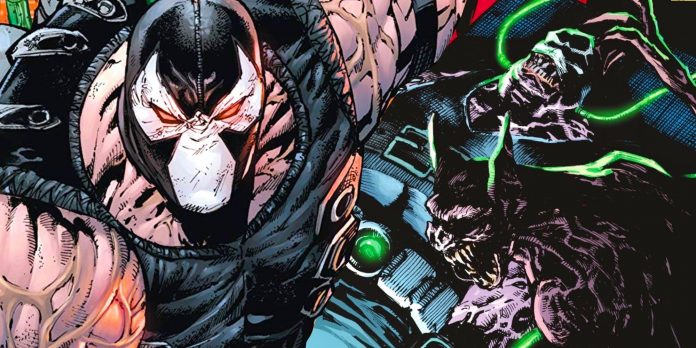 Warning! Ahead of the spoilers of Task Force Z #10

The latest issue of DC Comics’ Task Force Z finally reveals the truth about the zombie conspiracy involving Bane and the Red Hood. While fans have been quick to point out the inconsistencies surrounding Bane as an undead asset for the new Task Force Z, the mystery has finally been solved as to why it would seem 2 Bains are running around the DC universe. Similarly, the fascinating truth makes the series much more dynamic, and the stakes rise even higher.

At the beginning of the new DC Task Force Z series from Matthew Rosenberg and Eddie Burrows, it was clear that Bane was part of this new team of deceased villains. This new government team, partially resurrected with the help of a small amount of Lazarus resin with the promise of a full return for their observance, was formed as an offshoot of the Suicide Squad, which will be run by Two-Face. Similarly, although Rick Flagg is the leader of Task Force Z, Jason Todd’s Red Hood was chosen to lead this zombie team. This included Bane, whose body was apparently recovered after the events of A-Day, where reports claimed that the Joker staged a deadly attack on Arkham Asylum and killed Bane. However, the DC comics series about the Joker showed that the Clown Prince was framed, and Bane is alive and well. Naturally, this contradicted the existence of Bane the Zombie, who walked around with all his memories (the Red Hood made sure that Bane remembered killing Alfred before throwing him off the roof).

Related: Every Batman Adaptation Ignores How Bane Really Broke His Back

Now the new Task Force Z #10 finally reveals what’s going on with Bane. Instead of having something to do with clones (a legitimate option due to the existence of Bane’s cloned daughter Revenge), the problem proves that the Zombie Bane is not Bane at all, but someone completely different who was restored instead. Not only did this corpse have the same build and makeup as Bane, but the release reveals that he got all of Bane’s memories when Two-Face rightly believed that the villain would be the key to manipulating the Red Hood so that he would join them. However, Fake Zombie Bane is now in the hands of Mr. Bloom, who is building his own rival team of resurrected villains (and has now recovered the true memories of this mysterious villain). Surprisingly, Zombie Bane confirms that he is actually the animated corpse of Gotham itself.

Hank Clover Jr. and his sister Claire first appeared at the beginning of the Renaissance in DC’s ongoing Batman series. The Dark Knight inspired them to become heroes themselves. Using their fortune to buy artificial superpowers abroad, the Clovers became Gotham and Gotham Girl (although using their abilities shortened their lifespan by years). However, Gotham was killed by his own sister after he became enraged after his mind was corrupted by a Psychopirate. Now it looks like Gotham is halfway back to the land of the living, although he has clearly stopped impersonating Bane in this new series.

Given that Gotham Girl is still alive (her life complications cured by Batman), it will be interesting to see if Hank and Claire reunite as the series continues. Besides, Red Hood now knows the truth that the villain he thought was Bane was just a ploy to get him on the team. Perhaps Jason will be motivated to abandon Task Force Z after being lied to for so long. The new Task Force Z #10 has gone on sale.

Songs Of Conquest: Tips for the Barony Of Cloth faction

Dragon Ball: Date of All The News and Premieres of August...