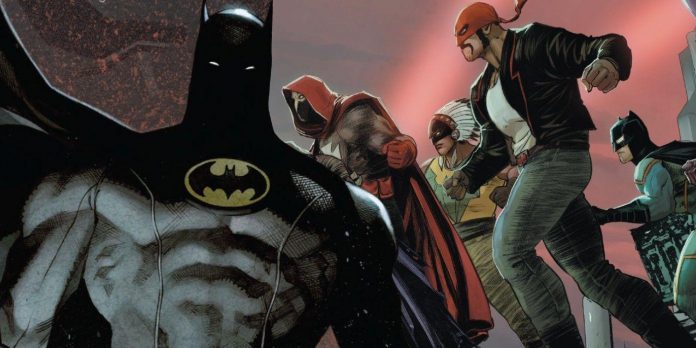 Throughout the history of Batman, Bruce Wayne has been defined by the loss of his parents, but Grant Morrison’s Batman Incorporated series demonstrates that Batman’s experience with grief is what makes him close. Batman’s grief is not something unique and fictional, it is very human and real. This is what he carries with him, and what readers carry with them.

Released between 2010 and 2013 in two volumes, Batman Incorporated sees Batman emerge from Gotham City, entrusting new and old heroes to become their country’s national Batmen. The first volume, in particular, is devoted to the origin of these various heroes and describes in detail some of the difficulties that lead them not only to fight crime, but also to become Batman. But by the end of the series, Batman had suffered his own terrible loss —his son Damian Wayne. As these characters find motivation for heroism in their own losses, readers may realize that the emotional struggle Batman is experiencing is more universal than is sometimes assumed in comics.

Batman Incorporated shows that Batman is so versatile because everyone experiences grief and can relate to him. In the context of Batman Incorporated, this leads to joining the fight against super-crime, but everyone knows the emotional basis of the series. While we may not have Batman with us to channel our own feelings into fighting crime, we can still understand that this experience shapes us and that there is courage in finding the strength to deal with loss and trauma as best we can.

The first issue of Volume 1 of Batman Incorporated, written by Morrison and Janik Puckett, showcases this theme through Jiro Osama, the future Batman of Japan. After killing his mentor, the crime fighter Mr. Unknown, Jiro’s initial instinct was to take revenge on the villainous Lord of Death. However, Batman understands all too well where this path can lead, and Jiro is fortunately able to live up to the ideal of both Bruce Wayne and Mr. Unknown by refusing to kill his enemy. Batman can channel Jiro’s anger into heroism and help him overcome it. He understands Jiro’s feelings because they are universal.

The conclusion of Batman Incorporated only makes the topic of loss even more acute. In Volume 2 #8 of Batman Incorporated by Grant Morrison and Chris Burnham, Damian Wayne is killed by his own clone. This devastates Bruce, who is spiraling, and is only helped by his extended family of bats. Throughout Morrison’s Batman story, Bruce reflects again and again on the “holes in everything” he feels in his life. In Batman Incorporated #13, Morrison’s finale, Bruce diagnoses this hole as what he felt after his parent’s death and what he feels now after Damian’s death. The hole is his grief, and it has never left him. This again shows that Batman is a universal hero, because he embodies the idea that grief is not something that leaves you, it’s something that everyone carries with them.

As Bruce Wayne muses in issue #13, Batman may never die, but that just means he has to keep going forward, carrying his grief and loss with him. After all, this acceptance by Batman is something readers can sort out and learn for themselves—to recognize that everything we feel may never completely disappear, but we need to keep going no matter what. If we have to take something from Grant Morrison’s Batman Incorporated, it’s that each of us can be our own Batman, be strong when we can, and trust our own bat families to help us when we can’t.