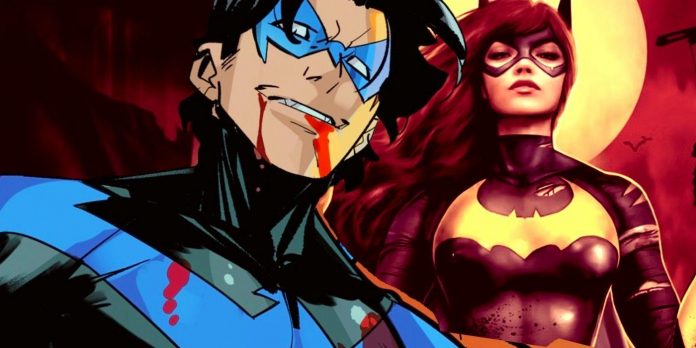 Attention: DC vs Vampires #7 spoilers ahead!
In the latest issue of DC vs Vampires, it was revealed that by the end of the events, Batgirl and Nightwing will be fighting to the death. Barbara Gordon and Dick Grayson, one of the most influential couples in D.C., are gradually becoming more romantically involved in the mainstream continuity. However, in this alternate DC universe, everything is completely different, where vampires have taken over the world, turning several heroes to their side.
Previously in DC vs Vampires by James Tynion IV, Matthew Rosenberg and Otto Schmidt, the vampire revolution began with the murder of Mary, the Bloody Queen. The oldest vampire who maintained peace between vampires and humanity, Mary’s death led to the rise of a new Vampire King who sent legions of vampires into the world. First biting supervillains to significantly increase their strength, vampires soon turned their attention to the heroes of the DC universe (starting with those with abilities based on light). Due to their early distortion of Green Lantern, the entire Justice League was either converted or killed, with the exception of Batman and Green Arrow. However, it turned out that Nightwing was the Vampire King who betrayed his bat family. Thus, Batgirl is the only surviving bat hero who has not been killed or turned into a vampire.
Related: Nightwing and Batgirl Take an Important Step in Their DC Romance
Having joined a small resistance movement of heroes who managed to survive, Batgirl is not very interested in saving the few survivors they can in the new DC vs Vampires #7. Instead, she wants to storm the gates of Gotham and directly pursue the Vampire King, clearly wanting revenge on Nightwing for what he did to their family and the whole world. However, it turns out that Gotham is practically impenetrable, having become the dark kingdom of the Vampire King after a global takeover by vampires.
Clearly, no one is going to stop Batgirl from chasing Nightwing. There’s too much bad blood (pun intended) and history for her to do anything less. Similarly, the Vampire King of Nightwing is probably counting on Barbara to come after him too. Thus, it is very likely that DC vs Vampires will end in a major fight between two lovers who have become dark rivals. Let’s hope that Batgirl will be able to avenge her fallen family before she is bitten or killed by the bloodthirsty vampire Grayson.
No matter how tragic the confrontation, it must be quite epic. If Batgirl manages to kill Nightwing, she will most likely reverse the situation when humanity can begin to restore peace. To that end, this new issue concludes by teasing that Harley Quinn is Barbara’s key to getting into Gotham, as she is the only one who has ever escaped with her life. Let’s hope that Batgirl will be able to find Nightwing in future releases (before the Vampire King finds her).