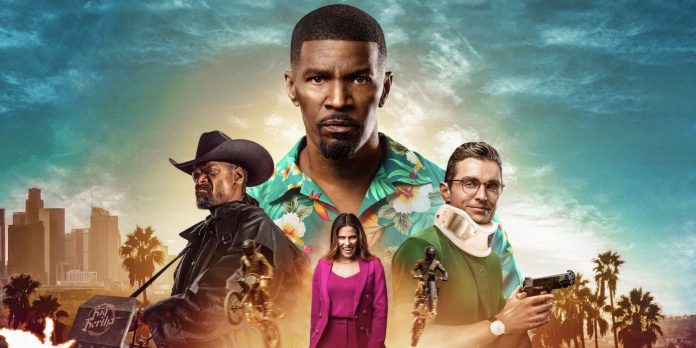 The central idea behind Netflix’s Day Shift is good: Vampire hunting is working 9 to 5 with a union that offers perks and other perks for membership. Think of it as blue-collar workers in something like Men in Black, where striving for the extraordinary is just a way to make a living. There are many opportunities to bring this idea to life in the cinema, and the “Day Shift” is wasting every one of them.

Directed by J.J. Perry and written by Tyler Tice and Shay Hutten (with Tice the newcomer also receiving story credit), “Day Shift” does everything in its power to squander the goodwill of its central vanity. For every world-building (which in itself often goes too far) and admittedly serious action, there are too many youthful jokes and inexplicable plot points to ignore.

Bud Jablonski (Jamie Foxx) is an ordinary Los Angeles resident whose pool cleaning business is just a cover for his real job: hunting vampires. However, unlike something like Buffy, the vampire slayer, they don’t fight for the “higher good” here. The motivation of Bud’s quest is just to get money. However, Bud was kicked out of the union for repeated violations, so he has to sell the fangs he collected for a meager amount to an independent buyer (played by Peter Stormare, who deserved a much bigger role).

Bud’s estranged wife threatens to move his daughter to Florida if Bud can’t earn $10,000 a week to pay for private school and braces. Faced with a ticking clock and an almost impossible task, Bud manages to reunite with the union with the help of his friend Big John (Snoop Dogg, who is an icon, but not a very good actor), provided that he is accompanied on the ground by union representative Seth (Dave Franco). While all this is happening, a powerful vampire (Carla Souza) seeks revenge on Bud for killing one of her own.

There is something really disappointing about watching a movie that starts with a good idea and turns into nothing more than an ordinary action movie, in which there is nothing particularly interesting. Day Shift had a great opportunity, perhaps, to explore the hustle culture and gig economy through the prism of vampire hunting. There’s definitely potential in the idea that people risking their lives to hunt dangerous monsters are just doing it to pay their rent. However, this film shows no interest in really digging into its own settings. Instead, Day Shift turns into a mindless excess of style over content, which almost completely discards the premise on which it is built.

There is an almost distracting level of world-building that is carried out exclusively through exposure. Unlike the work done in the John Wick films (two of which Shay Hutten worked on), “Day Shift” prefers to tell rather than show. Dave Franco’s set is burdened with a lot of this work. This includes explaining all the different types of vampires to Badu, who already knows all this, but still forces Seth to do it, presumably because the writers didn’t know how else to include it in the script.

Aside from the clumsy way of serving, all the rules of this world and its specific types of vampires never come into play so often. At one point, Bud mentions that after killing vampires emit gas that can attract other vampires if it gets on a person. The only way to get rid of it is to use a very abrasive cleaning powder. Does it ever affect the plot in an interesting way? No, it’s basically just a joke about the powder not getting into a very sensitive part of the body. This is another of the biggest problems of Day Shift: the dialogues in this film are nothing more than childish jokes and cliches. Seth wet himself after encountering vampires not once, but twice, was supposed to be a great joke, but his childish quality and recoil in the final act of the film are just pathetic.

Aside from elementary school-level humor and sloppy world-building, the Day Shift plot just never fits together so well. At the beginning, it seems like there’s a bigger plot involving something that allows vampires to go out in the sun. However, but in the second half of the movie, the characters just don’t pay attention to it as something they’ve known about all along. Then the plot turns into a shootout in an underground lair, so far removed from its setting that it seems like a completely different movie.

What almost (emphasis on almost) saves Day Shift from a complete disaster is a few well-executed action scenes. The opening scene, where Bud fights a writhing elderly female vampire, features impressive combat choreography, which is actually shown in the general plans, as well as some fun ideas, such as a quick shot of a mirror reflecting Bud’s fight with a vampire without her reflection.

What you can learn from the first official image of Assassin’s...

FIFA 22 On PC: Minimum And Recommended Requirements To Play