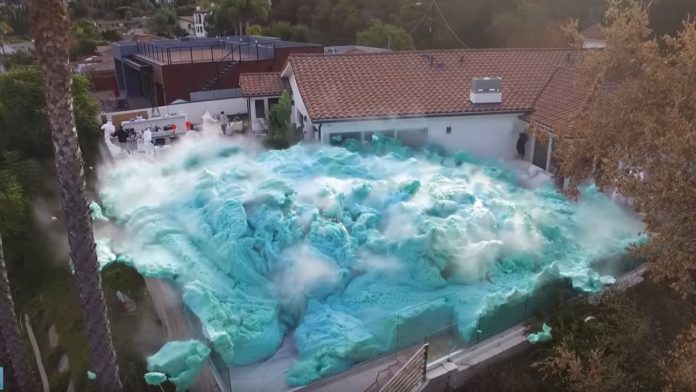 In a similar experiment he shared with TikTok, David Dobrik, who has made a name for himself in social media before, produced images that will keep his mouth open in his new experiment with YouTuber Nick Uhas. The video of the giant foam stack was quickly spread on the internet.

You remember the chemistry experiments in science classes in schools or that we saw on television as a child. Bubbling and gushing materials, perhaps with small explosions, would make the science lesson fun for some, but not all of these fun experiments can be done in a school lab or a classroom. Especially if you are curious and want to overdo it a little, you need to find different areas.

An elephant toothpaste experiment video, made in a large, open space and drowning this area into foam, has recently gained high popularity on social media. David Dobrik, who performed the experiment on the video of the famous YouTuber Nick Uhas’s channel, became the name of TikTok’s best video in 2019 with a similar experiment video he made earlier.

What is Elephant Toothpaste Experiment?

Elephant toothpaste is a foamy material obtained by the rapid separation of oxygenated water using potassium iodide or yeast and warm water as catalyst. The speed of the test to obtain this material depends on the density of the oxygenated water. This experiment is one of the most common chemistry experiments in school laboratories.

YouTuber Nick Uhas and David Dobrik, one of the most popular names in the internet world in 2019, collaborated to cross the scene that appeared in the previously viral experiment video. After Nick Uhas set up the assembly and showed the calculations and materials, the team gathered at Dobrik’s house, adding the catalyst to other materials, and everyone at the scene quickly began to move away. The giant stack of foam behind them overflowed the windows surrounding Dobrik’s garden.