Home Entertainment David Boreanaz Praises SEAL Team Season 6 and takes Us Back to... 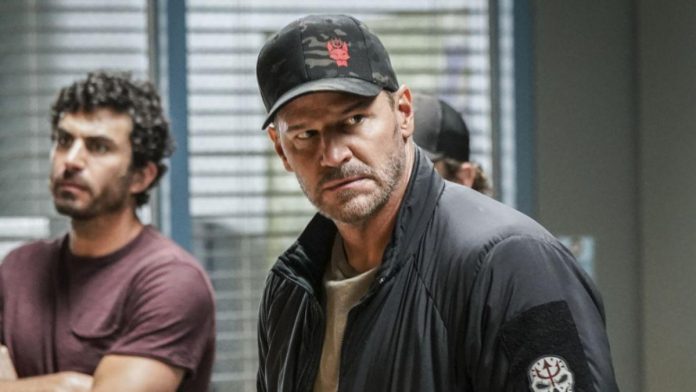 Fans are getting closer to finally reuniting with the Bravo team after what feels like an eternity. Months have passed since the explosive finale of the fifth season of SEAL Team, and many want to know what will happen next. Meanwhile, David Boreanaz shared cute behind-the-scenes photos. Back in June, Boreanaz shared a funny photo of BTS when filming for season 6 began, but now he’s throwing everything back, hyping the upcoming season of the Paramount+ series.

David Boreanaz took to Instagram to tease how mind-blowing the 6th season of the war drama will be. And along with that, he posted a photo from the pilot episode that debuted back in 2017.

It was definitely a wild ride for the actors, but more so for their characters. The Bravo team has faced some harsh things during their missions over the years. It’s also hard to believe that the team is now heading into a sixth season, which looks like it’s going to be even crazier than what we’ve seen in the past. There’s no word yet on when the season premiere will take place, but hopefully the actors will continue to post these posts, whether it’s BTS photos or other memories.

When Paramount+ renewed SEAL Team for a sixth season, the streamer also announced a movie based on the series (along with other NCIS). However, details about the film are still kept secret. This includes whether it will actually focus on the characters we know, or entirely on the new team. Despite this, if the action is as strong as in the series, fans should be more than delighted with it.

At first it seemed that SEAL Team would not be one of the main stars in season 6. Max Thiriot, who played Clay Spencer, is now starring in his new CBS series “Land of Fire,” which is scheduled to premiere this fall. Naturally, the fans were curious whether Tyriot’s Clay would return to the fight. Fortunately, in May it was reported that Thiriot will return to the ranks in the sixth season.

It’s interesting and nervous to think about what will happen in the sixth season. Season 5 ended with the team being ambushed and things didn’t look good. Knowing the Bravo team, they will be able to get through this, but there will definitely be some lasting consequences of this ordeal. I really hope that no one will die, since I still haven’t experienced the death of Full Metal. At the same time, David Boreanaz’s photos should just be the consolation that anxious fans like me need.

Watch all five seasons of SEAL Team right now on Paramount+ by subscription and wait for season 6! While you’re waiting for new episodes, check out the best shows broadcast on Paramount+ to keep yourself busy, as well as the CinemaBlend TV program for 2022 to find out what will premiere in the coming months!