Home Entertainment Dave Grohl of Foo Fighters performed for the first time since the... 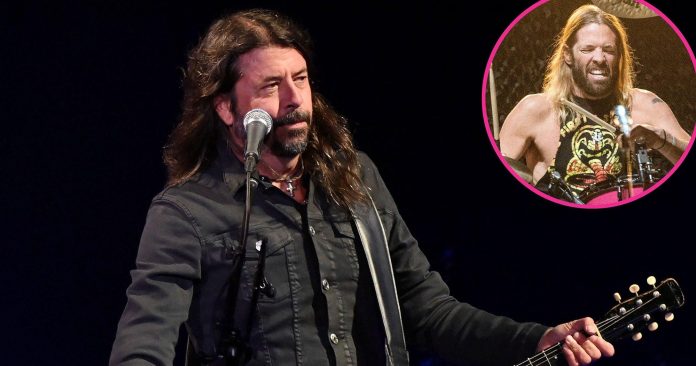 His hero is coming. Dave Grohl joined Paul McCartney at the Glastonbury Festival, performing for the first time since the death of Foo Fighters bandmate Taylor Hawkins.

The former Nirvana drummer, 53, took to the stage at the British festival on Saturday, June 25, during the headlining performance of the Beatles icon. McCartney, 80, told the crowd that Grohl “flew in specifically to perform” at the concert.

“I swear I would never miss being here with you, right now,” the Ohio native replied before the duo played “I Saw Her Standing There” and “Band on the Run.” Later, Bruce Springsteen performed the song “I Wanna Be Your Man” and his song “Glory Days”.

Grohl’s duets were his first live performance since the Foo Fighters postponed their tour dates after Hawkins’ death. The Texas musician, who joined the rock band in 1997, died in March at the age of 50.

“The Foo Fighters family is devastated by the tragic and untimely loss of our beloved Taylor Hawkins,” the band said in a statement. “His musical spirit and infectious laughter will stay with all of us forever. Our hearts go out to his wife, children and family, and we ask that their privacy be treated with the utmost respect during this unimaginably difficult time.”

The songwriter is survived by his wife Alison Hawkins and three children: Oliver, Annabel and Everly. Earlier this month, Taylor’s family broke their silence about the heartbreaking loss.

“My deepest gratitude and admiration to the global Foo Fighters community and Taylor fans everywhere for the outpouring of love that each of you showed our beloved Taylor,” Alison wrote in a long note posted on social media June. 8. “Your kindness has been an invaluable comfort to my family and me at this time of unimaginable grief.”

Taylor Hawkins of the Foo Fighters performs at the Innings Festival at Tempe Beach Park in Tempe, Arizona on February 26, 2022. Amy Harris/Invision/AP/Shutterstock

She continued, “As Taylor’s wife and on behalf of our children, I want to share how much you meant to him and how dedicated he was to ‘knocking you down’ during every performance. It was an honor for Taylor to be a part of the Foo Fighters, and he appreciated his dream role in the band every minute of his 25 years with them. We considered every member of the band and the extended Foo Fighters team to be our family.”

Alison assured fans that her late husband’s “sweet spirit and deep love for music will live on forever” thanks to his impressive catalog. “In honor of his life, now all of us who loved him the most should honor Taylor’s legacy and the music he gave us,” she concluded. “Thanks again to everyone for your love and sympathy. Taylor loved you all, and we love you too.”

Authorities found Taylor unconscious in Bogota, Colombia. While the investigation is still ongoing, a preliminary toxicology test allegedly revealed the presence of marijuana, tricyclic antidepressants, benzodiazepines and opioids in his body.

Grohl and his bandmates — Nate Mendel, Chris Shiflett, Pat Smear and Rami Jaffee — did not make separate statements regarding Taylor’s death. However, the band will celebrate his legacy with stellar concerts in London and Los Angeles this September. It will be attended by Alanis Morissette, Miley Cyrus, Leanne Rimes, Joan Jett, Wolfgang Van Halen and others.

ASTRO’s Sanha Will Act In The New Drama Crazy Love, When...