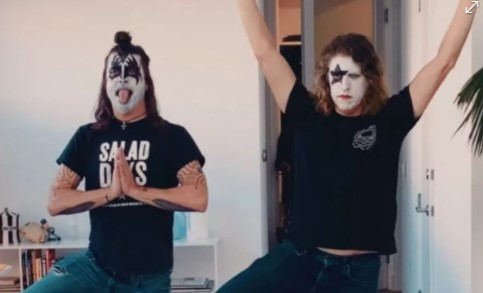 Over the past eight days, Foo Fighters frontman and vocalist Dave Grohl joined forces with musician Greg Kurstin to make a series of videos they called “The Hanukkah Sessions,” in which they paid tribute to some classic rock songs that have been composed by Jewish musicians.

Before the end of the Hanukkah festivities, Grohl and Kurstin have closed this musical cycle with a performance of “Rock and Roll All Night”, one of the most popular songs of the Kiss group, after having performed throughout this week some songs belonging to artists like Barry Manilow, Billy Joel or Amy Winehouse.

“What better way to celebrate another year of Hanukkah sessions than Chaim Wittz and Stanley Eisen, two young people from Queens who set the world on fire and thousands of stages like Gene Simmons and Paul Stanley,” noted Grohl and Kurstin in the description of the video, same in which they wore makeup similar to that of the group honored.

Grohl also thanked his fans for the support he received for his celebrations of one of the most important holidays on the Jewish calendar, promising that he will return for a third edition in 2022. “It will be hard to beat, but we will, yes we will.” , they pointed out in their statement through the description of the video.

Dave Grohl and the rest of the band Foo Fighters (Pat Smear, Nate Mndel, Taylor Hawkins, Chris Shiflett and Rami Jaffe) are currently gearing up for the group’s silver screen debut with “Studio 666,” a new comedy. horror movie in which the rock group will portray themselves facing a supernatural threat in a California mansion while trying to record their new album.

The film features additional performances by Leslie Grossman, Jenna Ortega and Whitney Cummings, who are directed by BJ McDonnell, known for his work on the series b horror film “Hatchet 3.” The film will have a limited release in theaters in the United States in February 2022.