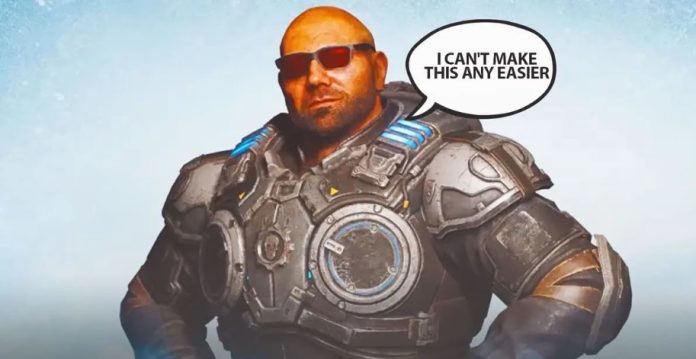 Dave Bautista “starred” as Marcus Phoenix on Twitter, trying to get a role in the upcoming Netflix action movie “Gears of War”.

I can’t make it any easier. @[email protected]#marcusfenix#GearsofWarpic.twitter.com/SzDpiT2rNA

In her Twitter video, Batista finds Marcus’ armor and says, “This is my type of ****.” Then he puts on his armor and says, “It’s fucking time.” It then proceeds to tag both the Gears of War account and the Netflix account.

In response, fans have already retweeted Batista’s video almost 20,000 times in just a day, gaining 134,000 likes. Gears designer Cliff Bleczynski is also impressed and admitted that Dave Batista is actually his “first choice” for the role of Marcus Phoenix. “Brother,” he tweets, “as a designer of 1, 2 and 3, you are my first choice.”

In addition to Bautista, Chris Blezinski also says that he could see Karl Urban take on the lead role, and Ryan Reynolds will support him as Baird, and Ice T will be the cherry on the cake as Aaron Griffin. Although the Gears of War designer reacted positively to the image of Dave Batista, he showed his contempt for the possible participation of another star in the project. “Oh and keep Chris Pratt away from the Gears franchise, please FFS,” he tweeted. Perhaps this is a response to Chris Pratt’s seemingly random choice for the role of Mario in the upcoming movie The Super Mario Bros. from Universal Studios.