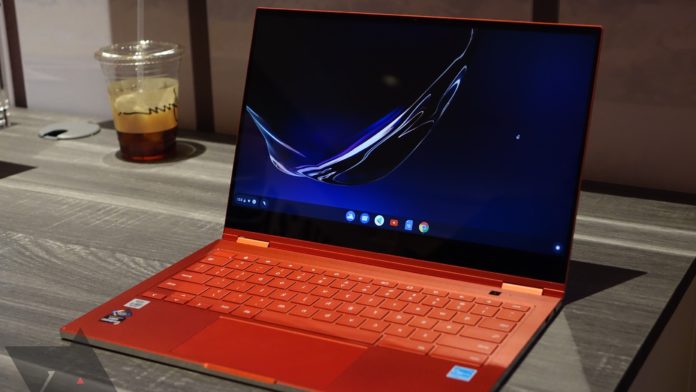 The Samsung Galaxy Chromebook will be available in the US in the coming weeks. The exact release date of the device was announced on April 6. Also, the device will find its owners with prices starting from $ 999.

Samsung Galaxy Chromebook features
The device offers Mercury gray or Fiesta red, which is a darker and bright orange color. The Chromebook, which comes with a 13.3-inch 4K OLED display, offers a resolution of 3840 x 2160 pixels. The device uses Intel UHD graphics card. Powered by Intel’s 10th generation Core i5 processor, the device features 8 GB LPDDR3 RAM and 256 GB internal storage. Bluetooth 5.0 and Wi-Fi 6 802.11 ax 2 × 2 are also among the connectivity features of the device.

The computer has a fingerprint reader and two USB-C ports. Memory capacity can be increased with MicroSD. The screen is 360 ′ rotating. There is also a stylus pen called S Pen. The thickness of the device is thinner than 10 mm.

When the device first appeared in January, Samsung had stated that there would be additional options, such as being able to upgrade to 16 GB of RAM and 1 TB of storage. However, it seems that these plans have been abandoned. The device will work with the Chrome OS operating system.

It is accompanied by two cameras placed on a 1 Megapixel front camera and an 8 Megapixel resolution keyboard.

There haven’t been many companies trying to sell Chromebook on this price scale before. Only Google valued Chrome OS devices for $ 999. The Pixelbook Go, which went on sale last fall, was worth $ 649.

It seems that Samsung’s new device also has a higher price than good models among its powerful competitors. The Asus Chromebook Flip C434 had a market value of $ 549. It is also seen that it has outperformed some Windows ultrabook models in terms of price.