Home Entertainment Daryl’s ending should avoid the problem of Michonne’s exit from The Walking... 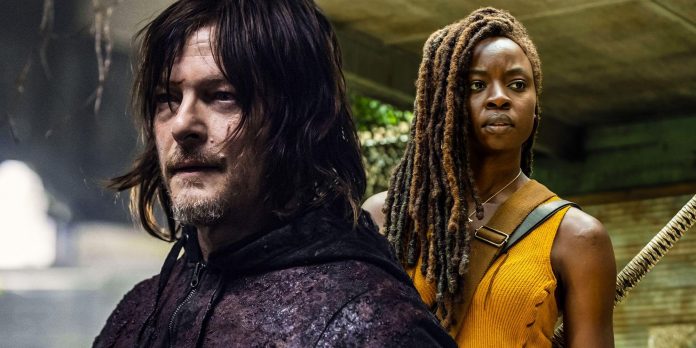 The plans of “The Walking Dead” for Daryl’s future create a risk that the series will repeat the problem with Michonne’s departure. In the midst of the conflict with the Whisperers, Michonne from Danai Gurira left the AMC series in the episode of season 10. Although she is not expected to return to the series, her latest story has allowed her to appear in the Rick Grimes films The Walking Dead.

Similar to what happened to Michonne in season 10 of The Walking Dead, Daryl (Norman Reedus) is about to leave Alexandria in the near future, presumably after the battle with the Commonwealth comes to an end. AMC confirmed its intention to give the character its own additional series. After the completion of the third part of the 11th season of The Walking Dead, Daryl will become one of three characters whose stories will continue after the show. While Maggie and Negan are busy fighting for survival in New York on the Island of the Dead, Daryl goes on his own journey somewhere in Europe. Initially, it was expected that Carol would join him, but this is no longer the case.

Because of Daryl’s new show, season 11 of The Walking Dead, Part 3, may face the challenge of ending his story in a way that doesn’t have the same problems as Michonne’s departure in season 10. Even though it made Rick the reason she left. , the show failed to properly justify Michonne’s sudden departure. Not only was her community still in the midst of a crisis, she had two children who depended on her as the sole guardian. And since Michonne’s absence was not short, “The Walking Dead” could not get rid of the feeling that Michonne had actually abandoned her children. It’s important that the same thing doesn’t happen to Daryl when he decides to leave Alexandria at the end of the series.

There was a time when Daryl left on his motorcycle to start his own story, it wouldn’t have been so difficult. However, since those days, everything has changed dramatically. The second part of the 11th season of “The Walking Dead” confirmed that Daryl is raising children Michonne and Rick. As their guardian, he now has a responsibility to these children that he never had before Michonne left. In other words, the Walking Dead can no longer easily send Daryl away.

In addition, the heroine understands that Michonne’s decision has affected her children. The pain Judith felt when Michonne was away was addressed in season 11 and certainly didn’t go unnoticed by Daryl. He should know that if he left too, he would only cause them even more pain by forcing them to go through abandonment a second time. Since this would be an uncharacteristic move for Daryl, “The Walking Dead” needs to not repeat its mistakes with Michonne and find a way to make his ending work. Perhaps the only way to do this is if Daryl takes both children with him, perhaps in the interests of finding Rick and Michonne and reuniting their broken family.

The Disney world has just made another change that has caused...