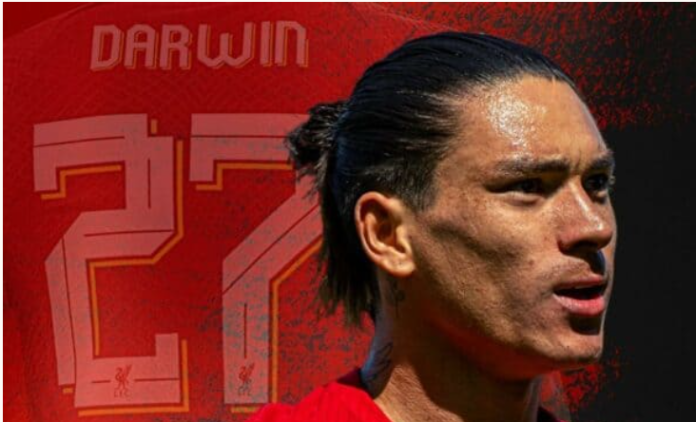 From “better than Erling Haaland” to “just shitty Andy Carroll” and now such a missed influence in a humiliating defeat to the worst in the league, Nottingham Forest — it’s been four whole months for Darwin Nunez.
As for the goals, it all started with the fact that he scored a header from close range against Man City in the Community Shield. A close-range finish with a scattering of stardust followed Fulham, followed by a poaching penalty against Arsenal, a side kick against Rangers and a winning header against West Ham.

Amid all this, Nunez inexplicably headbutted Crystal Palace’s Joachim Andersen during his Anfield debut, earning him a three-match suspension. Two more opportunities to prove themselves were denied by the death of the queen.

So what should we do now with a man who has played 13 matches for Uruguay?

Many were quick to condemn, but it’s worth remembering that the 23-year-old striker has made only six starts in competitive matches for the Reds since his transfer from Benfica for an initial 64 million pounds.

In six more matches from the bench, he played only 574 minutes for Liverpool.

Goals a little less than every 115 minutes can be improved, but despite all the talk — and there are a lot of them — that he should have scored a lot more, in fact he exceeds his expected goal tally of 4.7.

In addition to statistics, Nunes’ performances were mixed, and opinions about quality and value still differ.

The attributes causing headaches in defense were obvious—speed, power, a rocket shot and a little concern for reputation. Once on the field, there is an aura of indifference to the number 27, who inherited the shirt from Divock Origi, the most unpredictable man on earth.

There is a feeling that a really spectacular goal is in the post, as evidenced by Nunez’s instinctive strike from the summer against West Ham.

On the other hand, he made easy chances difficult. He really lacked the ability to make decisions at key moments, and his pass efficiency with a score of 69% is the worst of the Liverpool team with a large number of minutes this season.

A thoughtful review would have shown that he coped, that there were extenuating circumstances — not least the form of Liverpool, there were hints of what is yet to come, and we will wait and see what happens next.

It’s too early to judge

However, many football media do not have time for “consideration”, and patience is always at a price when a player can become a club record holder.

It feels like there are people desperately trying to call Nunes a “failure” from the very beginning.

But in terms of his first 12 matches for the Reds, how is he compared to the Liverpool strikers in the past?

Not bad if you look at it that way. It is also a lesson in how not to attach too much importance to a dozen matches for the first team.

Club record holder Ian Rush, signed for a record fee for a teenager in April 1980, did not make his Liverpool debut until December of the same year. His first goal for the Reds was scored in September 1981 in a 7-0 defeat at Anfield against the Finnish team Oulun Palloseura.

Previously, his teammates called him “ordinary”, and Bob Paisley allowed the Welshman to believe that he could be allowed to leave.

The rest is history: 346 goals in 660 games. The catch is unlikely to ever be exceeded.

At the end of the list is the beloved and cute Peter Crouch. Infamously, he went 18 games without scoring for Liverpool, calling it “the worst time in my football career.”

A deflected try against Wigan ended his 1,229-minute wait for a goal and Crouch went on to score double digits in each of his three seasons at the club, leaving the FA Cup victory with figures of 42 goals in 134 appearances.

Back to Nunez. He admitted that six matches without goals bothered him, while Klopp said that he sat him down to assure him of his work.

However, now, despite injury and a red card in the past, he looked like a happy man, while Anfield played their part by serenading him several times from the stands after he scored three points against West Ham.

The twist was welcome after the recent mischief.

With football content that develops the way it is, there is no extreme angle that someone somewhere is not ready to accept in the name of clicks.

Thus, we made a splash because of a short video in which the striker seemingly aimlessly threw the ball at the training of his country’s national team in September.

And in the same month, a journalist whom no one had heard of quoted sources, never mentioned in the Spanish newspaper El Pais, claimed that Liverpool had already admitted that they had made the biggest mistake of Klopp’s reign by spending a lot of money on Nunes.

It’s worth noting that Nunez is 6,600 miles from home, and he has to learn a new language.

This is something that will resonate with the majority. However, when it comes to football players, this is often forgotten.

Nunes, before Liverpool, had already swapped life in the area where he grew up, Artigas, for the capital Montevideo at the age of 14, leaving his family to sign with Peñarol.

At the age of 20, Nunes moved to Spain, signed a contract with Almeria, devoting himself to life in a new country and a new league thousands of miles from home. Just a year later, he was packing up again, this time going on a much shorter 390-mile trip to Lisbon for Benfica.

Two years have passed, and England is now his home.

The psychological challenge of such moves is rarely mentioned or taken into account in the early performances of a new player.

Instead, Nunez has been uselessly compared to Erling Haaland from day one.

One was the best shooter you can be at 22; the closest to guaranteed goals: 86 in 89 matches for Dortmund, 15 of which in the Champions League in just 13 matches.

Nunes, by contrast, made an impression by scoring two goals against Liverpool in Europe, but was still considered a rough diamond. In his Benfica statistics, he scored 48 goals in 85 matches, six in 10 Champions League matches and five in seven in the Europa League.

Of these goals, 34 were scored in 41 games last season. The campaign before the doubts about his abilities, voiced here, were also expressed in Portugal.

The Community Shield allowed the narrative of Nunez vs. Haaland to be further developed. Here is a player from Benfica who has already scored a goal, while the former Dortmund player missed decent chances.

The reactionary movement of the football media led to the fact that the bait and banter soon came out of the seams of the Internet — Liverpool achieved more success. Nunes won the strikers’ battle.

Since then, the views have changed and changed again. Holann scored 22 goals and made three assists in 1213 minutes in 15 matches for Manchester City.

His agent is already saying that he will become the first player with a billion-dollar income.

Nunez is best judged on his own merits, but how soon can the Liverpool striker be sentenced?

Measuring the opinions on Twitter before his first goal at Anfield in a Liverpool shirt, the winner of the match against West Ham, the range of views of fans stretched from dismissive to hero worship, with many doubts in between.

So far it's 518 minutes (five starts) for #LFC for the 23-year-old, with a return of four goals and one assist.

Concerned about his overall play?

Common words and phrases in hundreds of responses included “raw,” “potential,” and “chaos.”

Some supporters seem concerned, while others are excited and ready for it.

The reality is that Nunez will always carry a price tag. He will never be far from the scribe’s fingers. He also wears boots, at least in the eyes of many, Sadio Mane; a striker who scored 120 goals for Liverpool and is the 14th scorer in the club’s history.

Liverpool has historically been spoiled by bright talents, and it’s hard to follow. Many squirmed under the spotlight.

Nunes will seek to walk among the star names, rather than be listed alongside Carroll, Benteke, Borini and Balotelli as strikers who came, saw and could not win.

The six-year contract suggests that there is a lot of confidence that he will fall into the first category. And although outsiders will focus on the downsides, Klopp’s transfer record remains a success rather than a blunder, and deserves some credibility.

Other players, including Andy Robertson and Fabinho, took time to adapt.

And Luis Suarez, along with the scouts of Manchester United and Newcastle, seemed to be convinced of Nunez’s talents even before he arrived at Liverpool.

“I have 15 years of international experience, so I know something about strikers,” Suarez told Barcelona. “And I told them, ‘Pay attention to this one, he’s very nice, he has very interesting things.’

The poacher was definitely missed on Saturday and Liverpool now have six more games before the World Cup break. You can bet that the defense of Ajax, Leeds, Napoli, Spurs, Derby and Southampton is more likely to face a team without Nunez than with him.

There can’t be many Liverpool fans who don’t pray otherwise.

A broader debate about the dignity, value and status of Nunes in the history of the club is another time.

At the moment, Paisley’s famous quote sounds plausible: “If you are in the penalty area and do not know what to do with the ball, throw it into the net, and we will discuss the options later.”

The first look at the veteran of the “Primordial” Joseph Morgan...