DARQ: Complete Edition: Halloween is celebrated with horror games and the Epic Games Store offers a free title to spend a scary night of the dead. If your sleep was interrupted in Among the Sleep, the latest free game from the Epic Games Store, the nightmare will become more vivid with the new title they offer this week. As planned, DARQ: Complete Edition is the work of choice, which you can claim and obtain permanently. Players will have until Thursday, November 4, the date on which he will be replaced by Aven Colony.

DARQ tells the story of Lloyd, a boy who realizes that he is dreaming, but to his misfortune, his dream turns into a nightmare and he is unable to wake up. Night terrors unfold as he explores all the dark recesses of his subconscious. He will have to master and defy the laws of physics to manipulate the dream world in which he is immersed at will.

In addition to playing with the force of gravity, he will have to use stealth when approaching enemies, so powerful that it is impossible to face me in close combat, since they are stronger and faster creatures. Nothing better than drawing up a good plan to go unnoticed. Will He Get It. It all depends on the player himself. 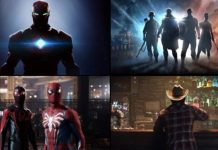 Sailor Moon is no longer a children’s anime?

CoD Warzone: How to Get the Multitool for Free