Home Entertainment Dark Souls 3: The Story of the Nameless King 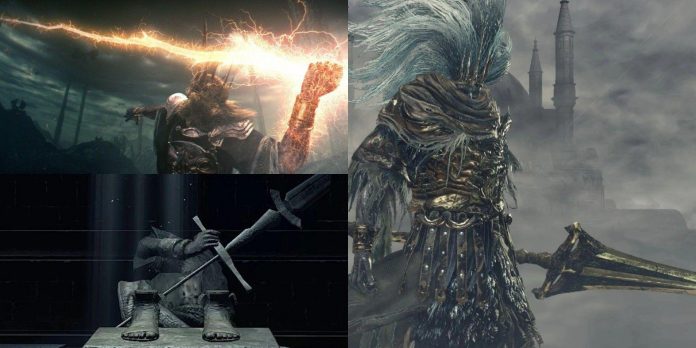 Dark Souls 3 is rich with lore and secrets that connect the sequel to the original Dark Souls’ story. Among all the callbacks and storylines, the ones that stand out the most center around Gwyn and his family. Since Gwyn was such a powerful and influential figure in the original game, it makes perfect sense for his family to continue to influence the world of Dark Souls 3, which presumably takes place long after the events of the original game.

Of all the major characters connected to the original Dark Souls, the Nameless King is perhaps the most significant but mysterious. The boss exists in a distant, optional area of Dark Souls 3 that players could miss entirely. However, if players want to explore the game’s intricate lore then it would be in their best interest to find Archdragon Peak and inevitably face off with the Nameless King and discover his weapon and armor, both of which have significant implications as to who exactly the foe is.

To understand who the Nameless King is, players must first understand Gwyn’s family, mainly his children. During the course of the original Dark Souls, Gwyn had asserted himself to godhood and ushered in the Age of Fire by striking down the Everlasting Dragons who once ruled over the land. After Gwyn began to rule, he and his children were seen as royalty and deities that were housed in Anor Londo, until the flame began to fade. Once the flame was threatened, Gwyn immediately went to the Kiln of the First Flame to attempt to rekindle the fire, and his children either went into hiding or ran from Anor Londo, in fear of losing the First Flame.

During the events of Dark Souls, it is assumed that Gwyn has two children. First is Gwynevere, the monarch who sits atop her thrown at the end of Anor Londo’s Grand Cathedral and is seen as a welcoming sign of hope, waiting for the player to receive her blessing that allows them to enter the Kiln of the First Flame. However, it is through Gwyn’s second child, Gwyndolin, that players are able to see the true state of Anor Londo after the gods evacuated the city.

As it turns out, once the gods left Anor Londo, Gwynevere also ran from the city, leaving only Gwyndolin, master of magic and illusion behind to protect the city. So Gwyndolin created a grand illusion that made it seem like Anor Londo was still bathed in sunlight and Gwynevere still remained in the city when in reality, the first daughter had escaped long ago with no one knowing exactly where she went.

During the events of Dark Souls 3’s Ringed City DLC players come to find a woman named Filianore, who is found in a slumbering state cradling what appears to be some type of egg. The game’s lore suggests that Filianore is Gwyn’s youngest daughter whom he gifted to the Pygmies along with the Ringed City itself as a sign of good faith after the events of the battle with the Everlasting Dragons. Though not much is known about Filianore, she is a major part of the Ringed City’s lore and is the one who transports players to the area’s final boss.

Dark Souls 3 also features another character connected to Gwyn, who has been purposefully hidden away in a difficult-to-reach area and has had his name stripped from him and lost to the annals of time. Atop the Archdragon Peak, a secret area hidden away in Dark Souls 3, the final area boss is called the Nameless King. Though not much lore is given about the character before the battle, it is heavily implied that the Nameless King is Gwyn’s firstborn son after players defeat him and begin to explore his interesting backstory.

Upon diving deep into the Nameless King’s item and armor descriptions, players can surmise that he was once a very powerful and revered god of war. During his battle with the dragons, Gwyn needed an ally just as powerful as he was, thus he groomed his first child to be a vicious warrior who possessed the power of lightning, just as Gwyn did. It was with this power and the uniquely designed weapon, specifically created to kill dragons, that the Nameless King aided his father in defeating the Everlasting Dragons.

After the Age of Fire began and all the dragons were thought to be killed, Gwyn’s firstborn son began to question the morals and motivation of his father and the wars he waged, so he left Gwyn’s side and eventually made peace with the dragons that he was bred to destroy. It seems that the Nameless King saw the natural order of the world, in which the dragons were able to survive the war and adapt to the world, which is why many dragons still exist within the games but have altered appearances and characteristics.

Gwyn did not destroy the dragons; he usurped their thrown and crowned himself king. The Nameless King wanted nothing to do with this, so he left his father and his insubordination led to Gwyn disowning his firstborn son and stripping him of his name. It is after these events that players find the Nameless King at the top of Archdragon Peak. Now stripped of his godhood and lineage, he seems to be connecting with the dragons and cohabitating with them, even taming one and fighting countless battles alongside it, in an attempt to destroy Gwyn’s ideology behind the Age of Fire and return the world to a more natural state.

The Nameless King’s Influence on the World

There are multiple theories as to who the Nameless King was before he was disowned by Gwyn. The first suggests that he was called Faraam and led the Lion Knights of Forossa. According to the lore of Dark Souls 2, Faraam is considered a powerful god of war, and the Faraam Helm features a warrior battling a dragon, both of which could connect the Nameless King to Faraam, but there is no definitive evidence. The second theory suggests the Nameless King is Sen of Sen’s Fortress which is supported by the fact that the fortress guards Anor Londo and the snake-men who roam the area are able to use lightning, an ability associated with Gwyn and his firstborn son.

Though all evidence of the name of Gwyn’s firstborn is a mystery that can be left to player interpretation, his place in Gwyn’s lineage was intentionally wiped from history. It is particularly interesting that Gwyn has put so much effort into disowning his firstborn son because Dark Souls often intentionally leaves out clues or detail to allow for players to surmise the story themselves. In the case of the Nameless King, it seems that the game wanted players to wonder why the character is nameless and explore his backstory until they discover his connection and eventually fall out with Gwyn.

Dark Souls 3 is available on PC, PS4, and Xbox One.