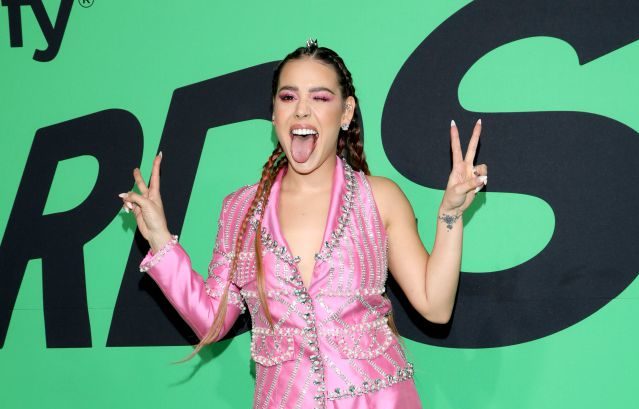 Danna Paola and Belinda pose together defending female empowerment. “Women are here to support us”

Unfortunately, in the music industry, if we talk about women, it has always tended to face each other. Legendary are the rivalries that have been created between Britney Spears and Christina Aguilera ; Madonna and Lady Gaga ; Taylor Swift and Katy Perry ; Tini and Lali … but, deep down, there is more legend and show than anything else.

But times change and now we are in times of female empowerment and sorority and considering that the 8M is approaching , with more force if possible. It is women who are breaking with this custom of separating them because they are aware that only the union between them will make them gain positions in a world still very much led by men .

“Women are here to support us, not to compete,” wrote Danna Paola with a photograph that she has hung in her stories with Belinda at an awards gala. And, when two women get together, they get what they set out to do.

Already upon arrival at the gala, the Elite actress made clear her empowered position: “ The woman has to parade through the carpet as she likes to parade , not by force in heels and dress, I think that is the empowerment we have to transmit. ”

And when she talks about the songs that have come to her, she didn’t hesitate to say loudly that she was hooked on Tusa de Karol G , “woman”, she called her.

And, precisely the Colombian one, was another of those who took advantage of this carpet to launch their feminist message: “that change that we are looking for also comes from here, so, to believe in yourselves, take a chance, work, prepare and see you on the road . ”

Feminist speech
Danna Paola took the microphone during the gala, along with her Mexican countrymen Angela Aguilar and Aislinn Derbez to launch a powerful message for women.

“It is a very important moment, in which women would not have, nor do we have to share but feel happiness for the success of all the great women . All, those who are present today, those who work, housewives … I think the most important thing is to unite. Today there are many artists who are the most listened to, and are women, ”said the Elite actress .

“ Feminism does not have to have a bad face . It can be a gender union for equality and for the well-being of all women. More love and less hate, friends, ”she continued.

A fight in which men also have their role and Aislinn Derbez wanted to remember them: ” Thanks to all the men who are joining this vision of the female world .”

It is clear that … something is changing.

Samantha broke the silence before the drama started

Who is Katarina Mazepa? 5 Things You Need to Know about...