Home Entertainment DanMachi IV: Episode 4 “The Mermaid (The Girl from the Water City)”... 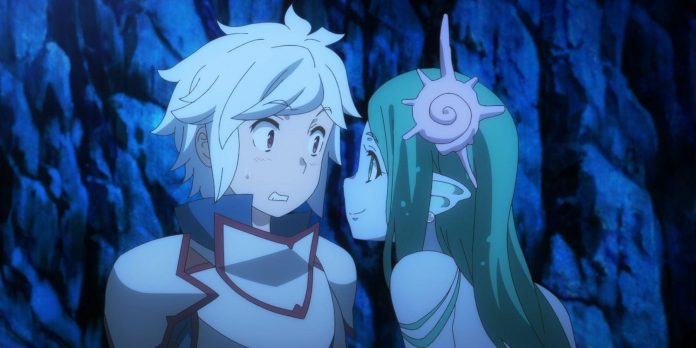 Below are spoilers for Episode 4 of DanMachi IV, “The Mermaid (The Girl from the Water City)”, which is currently being broadcast on HIDIVE.

Some of the best episodes are the ones that are so exciting that you don’t realize how much time has passed until the end credits, and suddenly waiting for the next episode becomes more excruciating. DanMachi IV continues to be strong thanks to a short episode in which there are a few cute moments as a respite from the plight of the characters.

Bell was separated from the party last week, apparently leaving the party in a worse position, but not all hope was lost. After falling from a steep waterfall, Bell struggled with a dangerous threat and was soon met in the dungeon by a new friend; a mermaid who introduced herself to Marie this week.

A little novice and a mermaid

Marie is a xenos who stayed downstairs because she is an aquatic creature who cannot move around the upper floors. Marie’s attractiveness and her gentle nature excite Bell in a completely charming way, which rarely tires even after three previous seasons of watching how women annoy him.

Marie is a bright spot in a very dark place, and despite the fact that her little corner of the dungeon is safe for her, she is afraid not only of herself, but also of Bell. She was lonely, but Bell has to find his friends, which puts him in a difficult position, given that there is a lot of land between her and the other xenos, not to mention enough water.

Apart from the first two scenes with Bell, there’s not much to say about Marie yet, and it’s unclear where their story will lead, given their race. We can hope that she will not become a new Wine of this season. Not to say that the Blame was not appreciated, but adding another exotic character for the sake of attractiveness and drama would be cheap.

Meanwhile, the rest of the group and the survivors they guard continue to encounter large groups of smaller monsters blocking their path. However, the threat from the monsters is compounded by the Moss Giant, who continues to hunt them, even smart enough to anger the monsters and force them to attack en masse.

Back in the first season, a “skip group” was introduced, in which a retreating group, pursued by monsters, made a dash to safety with the risk that other groups would be surrounded. This season, Moss the Huge uses a similar tactic to wear down Hestia’s family. The rest of the episode could have been just misery, but instead they were in great shape.

As the cast has grown, DanMachi has done a good job of giving each character time to prove themselves, big or small. Lily has been furious in recent episode reviews, but Aisha, Oki, Welf and Mikoto have some significant hero moments. In particular, in this episode, Mikoto outshines everyone by revealing a new technique.

As a side note, good subtitle design is essential in an environment like this, both HiDIVE and Crunchyroll have set some high standards for the presentation of subtitles in streaming. The addition of an editor’s note translating Mikoto’s new technique gave some noticeable context to the importance of the name and enhanced an already satisfying scene.

Despite the fact that the party is far from in the woods, it’s a pleasant surprise when the series shows that this party can be so persistent without Bell’s presence. Even if he is absent, the spirit that he inspires in people is still present. It is important for these characters to be strong and victorious, no matter how small they are, without a main character who could save them.

As it was said at the beginning, this episode ends with a teaser of upcoming events, leaving those who got into the excitement on the cliffhanger. It’s a good kind of frustration that creates excitement for the future, and it seems that—just maybe—Hestia’s family is approaching a turning point in their struggle.

Which animal crossing season is better (and why)