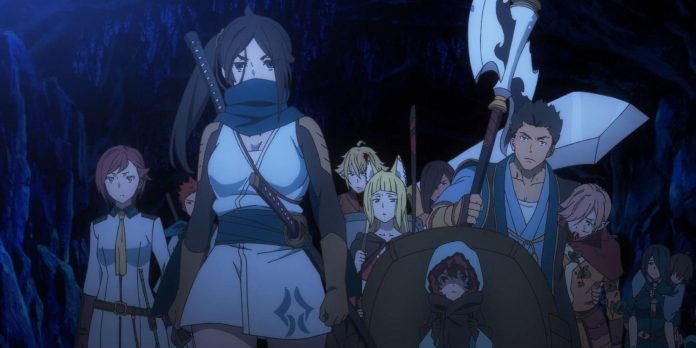 Below are spoilers for the third episode of DanMachi IV, “Parasite (Viscum Album)”, which is currently streaming on HIDIVE.

The first real horror of DanMachi IV showed itself, and the promises of a darker season this time were not exaggerated. Despite the fact that the odds are certainly not in favor of the party this week, there was a sense of hope and optimism all the time, which seemed deserved and supported the hype.

Last week, a mysterious monster appeared at the end and attacked the group with projectiles. He struck Chigusa and began spreading a plant infection through her, as well as through another survivor, Luvis, and all the other adventurers who fell into the monster’s traps.

The smarter the monster seems, the more terrible its cruelty, because proud adventurers are deprived of arms and legs and hide in fear. It’s an unpleasant sight that conveys the right threat without indulging in violence for too long. The beginning of the episode follows the assessment of the situation by the party.

These conversations, interrupting the main battle scenes, can be useful for summarizing the information received, presenting new facts and creating tension due to disagreements. However, scenes like this can also turn into conversations in a circle, so this exchange between the participants was a relief.

At first it would seem an obvious choice to run and get out of the dungeon for the benefit of the wounded, but as the situation becomes clearer more and more thoroughly, it becomes clear that this will not work. It would be better to face the monster face to face so that he doesn’t have a chance to get stronger before they come back to kill him.

The game is in a difficult mode

Previously, the action in DanMachi was effective due to some sometimes stellar sakuga and the personal experiences of the characters getting into fights, since the opponents were just monsters. But this new enemy and the uncertainty of their position have added a new layer to the battle, where half the thrill comes from watching both sides play a vicious game of chess.

Bell is the glue that holds everyone together, and the strongest of them, so his temporary separation from the rest as a result of this week’s battle should do harm. However, this episode was much more encouraging than expected, and Lily’s confidence makes her the most valuable player this season.

Despite some distance between Bell and the gang, he is still fierce and confident, unless the music made it obvious. Keiji Inai’s music has been impressive throughout the series, but in darker times like these, the intense proclamation of the coming battle by the horn section makes the blood beat faster.

Bell’s proudest moment in this episode is also a moment that admittedly seems weak given the build-up. In episode 1, Ayna told Bell about a special monster that was particularly deadly, but his disclosure and how quickly he was defeated were a little unimpressed. Perhaps it’s just because there’s a much bigger threat right now, but it seemed like such a small moment to escalate it.

To the credit of the scene, though, it’s nothing short of exciting, but maybe that energy could be saved for a scene with a little more weight. At the end of the battle, Bell bumps into a new ally—or at least someone hopes they are friendly-and the episode ends with the group in the thick of trouble, but confident in their chances.

As the cast of DanMachi expands, so does the tension brought to the plot and the emotions associated with each battle. Even in just three episodes, the performances were stellar, and every setback and comeback really highlighted how far the party had gone and how it would only get harder.