Home Entertainment Dakota Johnson spoke about the chaotic conflicts of “Fifty Shades” with the... 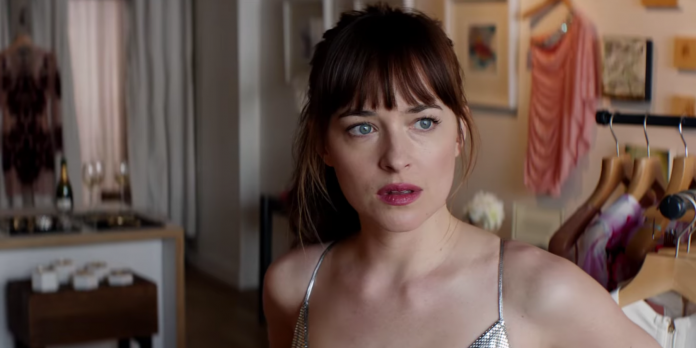 James wielded enormous power over the making of Fifty Shades films, hand-picking producers who went on to make important creative decisions, such as the controversial choice of Jamie Dornan and Dakota Johnson to star Christian Grey and Anastasia Steele over several bigger names. The production process of the film adaptations was notoriously chaotic: the original director Sam Taylor-Johnson left after the release of the first part due to disagreements with James. In the end, the Fifty Shades films were extremely vilified by critics, although the series eventually grossed more than $1.3 billion worldwide.

By topic: Who did Dakota Johnson play in 21 Jump St (and will she return in the spin-off?)

In a new interview with Vanity Fair, Dakota Johnson spoke about the creation of the film trilogy “Fifty Shades of Grey”, which she called “psychotic”. Actress Anastasia Steele tells how the production was complicated due to the participation of James, with whom Johnson often clashed, as the author demanded that her books be adapted to her own requirements, often against the will of the screenwriter, director and actors. Read below what Johnson shared:

I signed up for a completely different version of the movie that we ended up making. [E.L. James] had a lot of creative control, all day, every day, and she just demanded that certain things happen. There were parts of the books that just wouldn’t fit in a movie, like an internal monologue that was incredibly cheesy at times. I can’t say it out loud. It’s always been a battle. Always. When I auditioned for this movie, I read a monologue from Persona and thought, “Oh, this is going to be really special.” There were many different disagreements. I’ve never been able to talk about it truthfully, because you want to promote the film properly, and I’m proud of what we did in the end, and everything turns out the way it should, but it was difficult. We were doing takes of the movie that [James] wanted to make, and then we were doing takes of the movie that we wanted to make. The night before, I was rewriting scenes with old dialogues to add a line here and there. It was like chaos all the time.

This is the first time Johnson has fully revealed some of the controversies that took place behind the scenes of the Fifty Shades films. As she mentions in her comments, Johnson was previously obligated to promote films, and revealing some of these secrets at that time would be inappropriate. Now that several years have passed since the release of the third and final part of “Fifty Shades of Freedom” in 2018, Johnson is free to share her version of the story, although she admits that she is holding back a little so as not to harm the careers of others. and reputation.

Despite her various disagreements with the author of Fifty Shades of Grey, Johnson admits that she is proud of the final product and does not dislike the author who helped her play her breakthrough role of Anastasia Steele. Like Kristen Stewart, Johnson is starting to get rid of her career-defining role in a series of highly criticized films, with solid performances in a variety of arthouse films, the latest of which were “Lost Daughter” and “Cha-cha, Real Smoothness.” Johnson will next be seen in the Jane Austen film adaptation of Persuasion, which will be released on July 15 on Netflix.

BTS announce a Break to Focus on Solo Projects