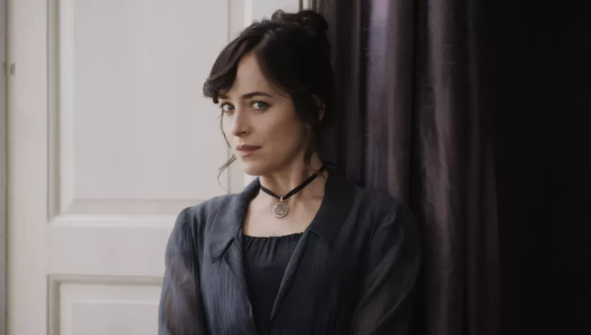 Being a famous celebrity has its privileges, but there are certainly disadvantages, and some of them are potentially dangerous. Celebrity stalkers have killed people in the past, so it’s understandable that any celebrity would want to take such things seriously. The issue has apparently reached this level of concern for Dakota Johnson and Chris Martin from Coldplay, as a restraining order has now been issued against the woman who allegedly harasses them.

According to documents obtained by The Blast, a woman referred to only as “Miss. Brown,” began stalking the Johnson and Martin couple in April of this year via social media. She reportedly claims that she and Martin are married and living together, despite Martin claiming in a restraining order statement that they have never met or spoken to each other.

Recently, harassment has gone beyond words, as the woman in question was apparently seen outside Chris Martin’s house, which at one point forced Dakota Johnson to return to the house after she planned to leave because she was afraid there might be a quarrel with Ms. Brown. The alleged stalker apparently claimed that Johnson was using “black magic” in an attempt to harm her. Martin and Johnson are clearly taking this situation seriously. In the request for a restraining order, the woman is called “delusional” because of her statements about her alleged relationship with Martin. In this case, the situation can be very frightening simply because you can’t be sure what a person is capable of.

Too often we have seen stalkers trying to cause real harm. Earlier this year, a fan of actress Alexandra Daddario was arrested near her house while she was inside. At that time he had a gun. In 2020, WWE star Sonia Deville was the victim of an apparent abduction by a stalker. In the most serious cases, we have seen stalkers resort to violence. Back in 1989, an obsessed fan killed actress Rebecca Schaeffer.

And a stalker can potentially harm anyone connected to the victim. In this case, Chris Martin is the focus of the stalker’s attention, but it also puts Dakota Johnson in danger. The same thing happened with Keanu Reeves’ girlfriend, who had to get her own restraining order against an alleged stalker who was fixated on the actor.

The judge ruled that Brown must stay at least 100 yards away from Martin, Johnson and Martin’s children. I hope this will be enough to prevent any quarrels in the future and to make all participants feel safe. At least if the woman in question violates the restraining order, she will have a legal opportunity to remove her from the situation.