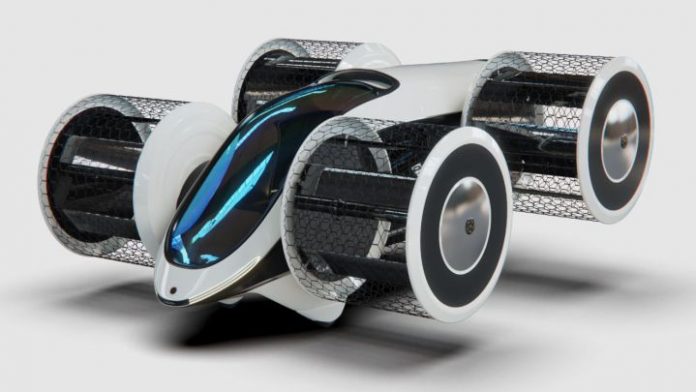 Cyclocar: If the world had not had to stop suddenly due to the Coronavirus, we would have already had the Tokyo 2020 Olympic Games, and in them we would surely have seen Toyota’s flying car, the first VTOL of its kind, carrying the torch to the Olympic furrier -or at least that was the intention of its creators. But the world has come to a standstill, and the flying cars are lagging a bit. Although in Russia it seems that not so much.

Within the framework of the Cyclone Advanced Research Foundation project, work has begun on the development of an ‘aeromobile’, a Russian flying car called Cyclocar, the first in the country. With cyclical propulsion systems, the estimated payload of the vehicle is 600 kilograms and the passenger capacity will allow it to carry a maximum of 6 people. The main contractor for the project is the Institute of Thermophysics of the Siberian branch of the Russian Academy of Sciences.

During the first stage of the work, the preliminary design of the machine was carried out and the cyclic propeller (cyclic rotor) with the diameter of 1.5 m was tested on the ground. The calculated dimensions of the Cyclocar are 6.2 x 6 meters, with a maximum speed of 250 kilometers per hour and a flight range of 500 km.

In addition to its compact dimensions compared to helicopters, a distinctive feature of the vehicle is its ability to land on inclined surfaces (up to 30 degrees) and even be able to perch and tie down on inclined and vertical surfaces, something that no other flying car in development can. make.

In 2020, the 60 kg cyclone developed under the Cyclone project made its first flight, in which the basic principles, algorithms and control mechanisms, the automatic control system and the aerodynamic arrangement were tested. Flights of the first full-size Cyclocar prototype equipped with an all-electric propulsion system “are scheduled for 2022.”

The Cyclocar is itself “an aircraft that is sustained and propelled in the air by cyclic propellants.” Among the main advantages of these propulsion systems are:

– The compactness of its design

According to its creators, “we hope that the technical aspect of the Cyclocar will be reflected in a real plane in the horizon of 3 years”, so that by 2024 – 2025 it could already go into operation. The Cyclocar body can comfortably accommodate up to 6 people. Boarding will be possible both from the stern and from the stern. The tail apparatus allows loading in a coupled construction mode, transporting long loads in the cargo version, installing standard medical modules for the transport of patients and wounded in the salon, so it has both civil and military use.

An important feature of the Cyclocar’s propulsion for the people around it, and especially the passengers, will be the peripheral protection, which does not allow a person to touch the rotating blades, while protecting the blades from the entry of foreign objects. .

The Cyclocar “will not be more difficult to control than modern vehicles.” Piloting can be done by the operator on board, either from a gadget in the area of ​​the communication system on board the Cyclocar or from a ground control station as a complete drone. The pilot-operator will actually carry out the direction control, transmitting the orders to the automatic control system in terms of direction and flight speed and performing the necessary control.

Will mother Russia win the flying car race? Of course her Cyclocar promises.

The Netherlands Will Follow TikTok for Using Child Data

Supersonic Plane That Will Take You In 3 And A Half...