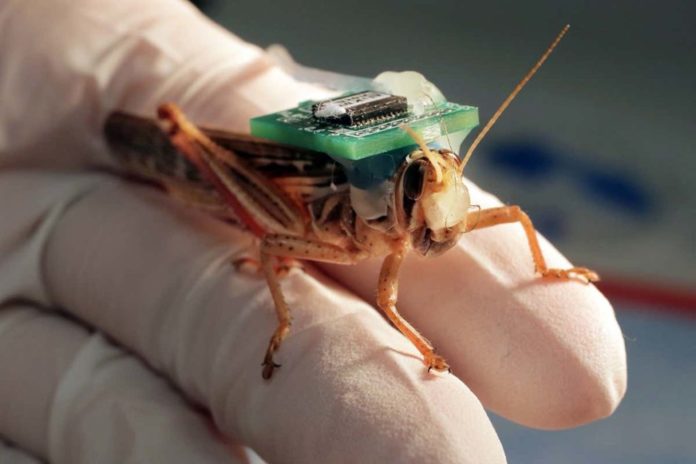 Researchers from the University of Washington have developed a system that instantly sends data and uses insects’ sniffing senses. The resulting cyborg grasshoppers will be used to spot bombs.

We have seen dogs that found sniffing bombs in movies before. In real life, our furry friends help us detect bombs, drugs and other substances.

Barani Raman, a researcher from the University of Washington in the USA, decided to use another species to find a bomb by sniffing and decided on grasshoppers. As a result of the studies carried out, cyborgs of a grasshopper species native to America were produced.

Cyborg grasshoppers in bomb hunt:
Sniffing sensory neurons of insects are located in their antennae. Grasshoppers can also identify chemicals in the air thanks to this antenna. When these creatures encounter an odor, electrical signals are sent to the part of their brains known as the antenna lobe. Each grasshopper antenna has an average of 50,000 neurons.

Researchers; In their experiments with grasshoppers, they squeezed into the air many fragrances of explosives, including TNT and DNT, and the essences of some non-flammable substances. As a result of the study, it was observed that the locusts activated different neurons when they perceive different odors. This shows that locusts can distinguish between explosives and other substances, and even distinguish between explosives.

The difference between the locusts’ perceptions can be controlled by attaching electrodes to the antenna lobes of the locusts. This provides researchers with a new method of controlling bombs.

Tests of the cyborg grasshoppers have begun:
The researchers placed quite light sensors on the back of the locusts. These sensors can detect electrical activities instantly and transfer data to computers wirelessly. Grasshoppers sent accurate signals for 7 hours until they died due to fatigue in the tests.

After the grasshoppers remained immobile, the researchers moved the insects, this time by placing them on wheeled platforms. In the study, it was revealed that grasshoppers react to explosives of different density at different levels.

The seven grasshoppers used in the study achieved an average success rate of 80%. This rate dropped to 60% in single grasshopper trials. In the study, the ability of locusts to find the explosive smell was not tested in case of multiple odors.

Cyberpunk 2077, No Man’s Sky and Molyneux