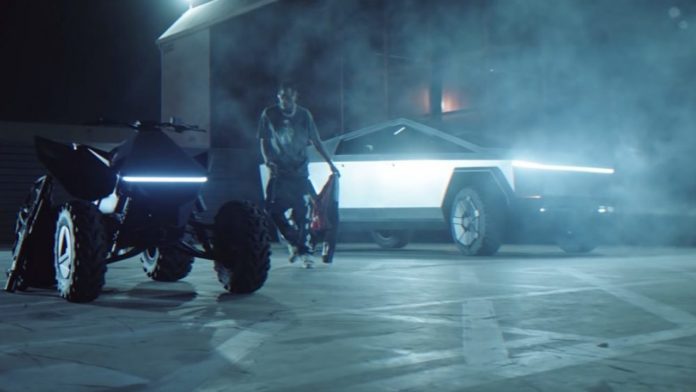 Travis Scott’s ‘GANG GANG’ clip, which was uploaded on December 27, revealed an intriguing detail. Tesla’s Cybertruck and Cyberquad tools appeared in the clip.

At the launch of Cybertruck, Tesla announced not only a van but also a separate ATV that could be put on the back of the van. The company’s ATV was also called Cyberquad. Where do you think this duo appeared? Again, unpredictably, in Travis Scott’s new video.

On Friday, an interesting detail was discovered in the video clip Trav GANG GANG – JACKBOYS: SHECK WES, DON TOLIVER, LUXURY TAX 50 & CACTUS JACK Trav published by Travis Scott. Tesla’s Cybertruck and Cyberquad vehicles were seen for a few seconds from the 50th second of the video and the rest of the clip.

So why are Tesla’s new vehicles in Travis Scott’s clip? To answer this question, we may land on Tesla’s non-advertising policy. As you know, Tesla is a company that does not advertise at all but can reach great sales figures.

But not to advertise at all does not mean that product placement will never be done. Tesla Cybertruck and Cyberquad in Travis Scott’s video could also be an example. Still, it is not clear why the vehicles in this video are there.

There is a different way to add Tesla tools to the clip. Probably Travis Scott, or one of the people who directed the clip, has a connection that knows Elon Musk closely. Sure, it’s probably Travis Scott. Because Kim Kardashian’s following sharing yesterday reinforces this possibility:

As you can see, Elon Musk is at a party with Travis Scott and a few friends. So this raises another question: Does Elon Musk have the tools added to the clip to do his friend a favor, or for advertising? Did you also see the Not-A-Flamethrower by Boring Company besides Cyber ​​vehicles? Here are your comments.