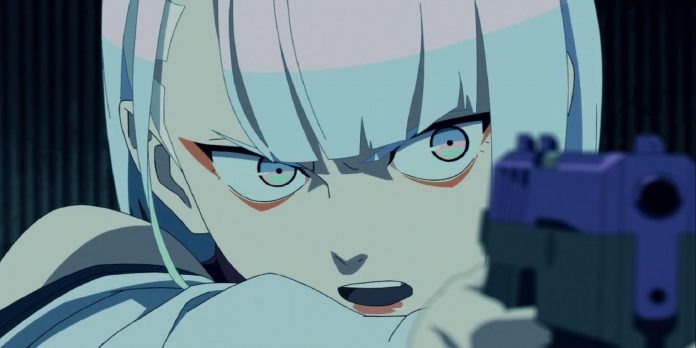 Even if someone who watched the Cyberpunk: Edgerunners anime didn’t immediately launch the game on their console or PC, many still liked the series, which made it a critical success. Cyberpunk: Edgerunners reviews praised the way the anime reflects the setting and stories of Mike Pondsmith’s universe and the CD Projekt Red video game. Also, many fans immediately fell in love with the characters of the anime Edgerunners.

Two of these characters are now getting homage in Cyberpunk 2077 thanks to a pair of new mods created by Nexus Mods user walrus159. The first of these mods changes the appearance of the Unity pistol from Cyberpunk 2077, giving it a blue-black color to match the weapon that Lucy uses in the anime. The second Walrus159 mod also adds a custom version of Militech Omaha, which mirrors the weapons that Rebecca wields in the anime.

Rebecca uses two guns in Cyberpunk: Edgerunners, which cannot be done yet in Cyberpunk 2077. However, both of her unique neon pistols are introduced into the game and can be created directly in the player’s inventory using the command can be found on the Nexus mods page on the walrus159 website. Players can already get their hands on the David Martinez jacket from Cyberpunk: Edgerunners, as CD Projekt Red has included this clothing in its crossover update with the anime.

For any player who wants to modify Cyberpunk 2077 in different ways, there are plenty of files to upload to Cyberpunk 2077 Nexus, some of which may even add whole new areas to explore. Recently, the Cyberpunk 2077 mod has added several new areas to the No-Tell Motel, further improving the immersive nature of the game’s interior spaces. Also, it looks like mods will become much more prominent in the future of Cyberpunk 2077, as CD Projekt Red has released an official modding tool for the game.

Cyberpunk 2077 has already been released for PC, PS4, PS5, Stadia, Xbox One and Xbox Series X.

Dune: Part 2 may have moved on from the release date,...