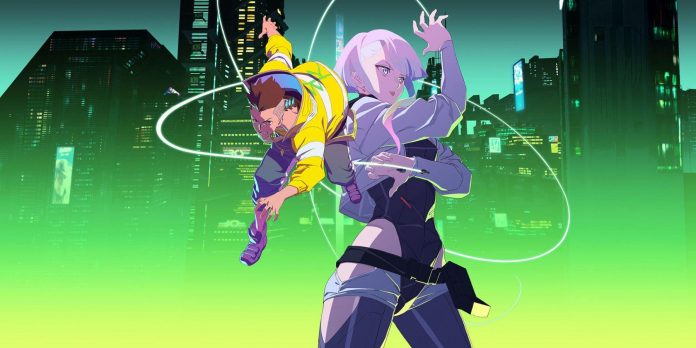 Trigger Studio is known for selling a special feel from its anime, which is usually associated with the studio’s past talent in GAINAX and the Gurren Lagann or Kill la Kill style. But after the Trigger panel at this year’s Anime Expo, Cyberpunk: Edgerunners could be a big step forward and another step towards becoming bigger internationally.

Announced back in 2020, when Cyberpunk 2077 was still hyped, Edgerunners is an animated series about which little was known. Almost all that was known was that it would be released in 2022, so at least Trigger set a better release date than CD Projekt Red. The little synopsis was as vague and engaging as the premise of the game it’s attached to; a boy surviving in a tech-obsessed dystopia. It was announced that it would have 10 episodes, and it would be directed by Hiroyuki Imaishi, who at the time was a step away from the critical acclaim of Promare.

Exactly two years later, the first teaser was shown, and now there is still something to chew on before the release in September. The trailer shows a lot of familiar aesthetics and images, from a sprawling metropolis to fashion and familiar corporations advertised everywhere.

In the two years since the announcement, there have clearly been changes, and even the main character does not look the same as on the first promo poster. Given the similar background and images in the teasers, this anime may not be so much a new story as a remix of the game’s message.

Needless to say, how wild, fast, and “beyond” Trigger’s original stories can be, but they never really adapted what they didn’t do themselves. Despite this, while Trigger mostly makes original stories, but in cases where they work with an already existing IP, winks and nods to this franchise are numerous.

Take, for example, Hiroyuki Imaishi’s short film for “Star Wars: Visions” “Gemini”. It’s a small and intense story, and although it’s incredibly different from everything else in Star Wars, Imaishi created it as a retelling of the original story. Aside from the style and pace, things like family themes or visual homage to the series are the ways in which this is a condensed remix of the franchise as a whole.

With all the delays and obstacles plaguing the production of Cyberpunk 2077, Trigger must have been under pressure to understand the world they would be creating. By this point, Saya Elder from CD Projekt Red remembered that she had given them an early build for the game. Looking at the state of the show, it had a big impact on Imaisi and the company. a muse to work with.

If we leave aside the obvious dogmatic narratives that permeate the lives of the main characters and drive them into poverty, the views of the main characters on the world around them are similar. In Cyberpunk 2077, Vi is a single—minded character who basically strives to win big and climb the hellish capitalist ladder. And like any ladder, it attracts the eye to the sky.

In one of the endings of Cyberpunk 2077, Vi realized his dream and became a legend, and their final result is a robbery that takes them into space from all places. Similarly, the Edgerunners trailer repeats images of rockets or space, whether literal or potential dream episodes.

In fact, the two endings of Cyberpunk take place in space, where the most powerful corporations and the richest living are fleeing from earth and all its inconveniences. The sky and the space beyond it are typical visual effects associated with escaping from imprisonment or oppressive structures. Cyberpunks are dreamers by nature, and what is better to dream about than stars?

Knocking on the doors of paradise

Cyberpunk 2077 was about Vi’s dreams of escaping slavery under capitalism, which were interrupted by a diagnosis that leaves them very little time to try to save themselves. They are at the lowest level: angry, anxious and scared than David Martinez, the main character of Edgerunners, seems to share with Vee.

The sound of the heart monitor can be heard through the entire trailer, only it beeps faster. Repeated shots of Martinez’s nervous tic; tapping his foot. Something went wrong, perhaps a personal tragedy, and it forces them to delve into Night City to fix it. In this journey, they are assisted by the minor character Lucy.

Even in the Netflix series “Behind the Scenes,” she remains mysterious, known for her introverted personality. Just as the game focuses on Vee and Johnny Silverhand, Edgerunners is dedicated to David and Lucy. However, Silverhand was just an AI reconstruction of the man himself, stuck in V’s head, while Lucy seems to be alive and well.