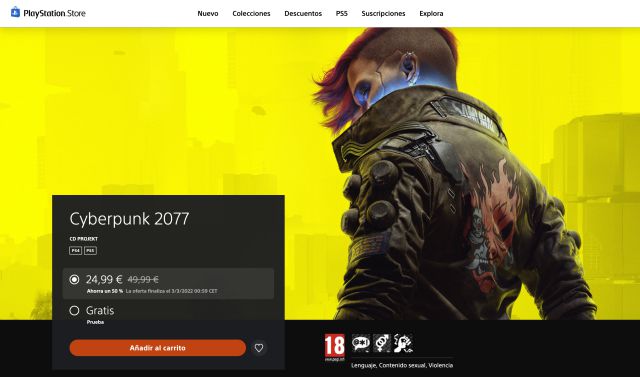 Cyberpunk 2077: The availability of this trial version is temporary. CD Projekt RED details what this demo includes, how many hours of gameplay it offers and what restrictions it includes. CD Project RED has announced this Tuesday the long-awaited next-gen update for Cyberpunk 2077 on PlayStation 5 and Xbox Series consoles. The so-called version 1.5 is here and it’s totally free for PS4 and Xbox One players; later it will do the same on PC and Google Stadia. However, for those who have doubts about whether or not to take on the ambitious project in what is apparently its “definitive” version, a free trial version for the new generation is now available. We tell you everything below.

The free demo of Cyberpunk 2077 is now available for download through the digital portal for Xbox and PlayStation consoles; that is, Xbox Store and PS Store. Here we leave you the download links, which you can access from the console itself by searching for the name of the game or from a web browser. One of the purchase options is the trial/demo version, which as you can see is totally free, although it has restrictions that we detail later.

Restrictions, duration and other aspects you should know about the Cyberpunk 2077 demo

In summary form, we leave you all the key points of the free demo of Cyberpunk 2077 that summarizes CD Projekt RED in the support portal of the official website.

We can play for 5 hours; once that time has elapsed it will be possible to continue playing if we buy the game.
The free trial for the next generation of Cyberpunk 2077 will be available for 30 days. Until March 15, 2022 at 17:00 CET.
What is the reason for this limitation? We quote verbatim: “In our opinion, 30 days is enough time for opinions, analysis and debates to be generated for all those interested in Cyberpunk 2077 for the next generation consoles after the launch period of this version of the game”.

During the five hours of the trial period there are no restrictions: it is the full version.
If you decide to purchase the game after starting the trial you will keep all your progress on the console you started the demo on; without any problem.

Six Days In Fallujah Delayed, It will launch Late 2022