Home Entertainment Cyberpunk 2077: Rebecca’s shotgun can be used to avoid damage when falling 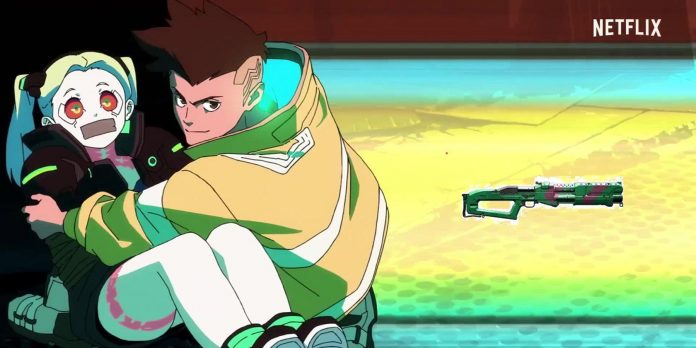 The newly added Edgerunners DLC content for Cyberpunk 2077 adds a special shotgun that fans have discovered can completely prevent fall damage. It’s been an exciting couple of weeks for fans of Cyberpunk 2077, a game that has certainly experienced quite a few issues since its initial launch in December 2020. Although the game has experienced one of the most disastrous launches in recent history, CD Projekt RED has spent the last couple of years fixing the game, releasing new updates and fixes to help change the situation.

For many fans, Cyberpunk 2077 is in much better condition now than when it was launched. Although CDPR was forced to radically change its content plans after launch in favor of priority fixes, the company has since been able to create more content and even introduce fans to the expected Phantom Liberty expansion, due out next year. In addition to revealing the expansion, the most recent update also added unique content from the Netflix anime series Cyberpunk 2077: Edgerunners.

In addition to the unique side mission, the Edgerunners update for Cyberpunk 2077 includes new weapons and gear from the show, including a jacket based on the one worn by David Martinez. One particular weapon, a shotgun called Guts, which Rebecca’s character uses, can also be found while exploring Night City around the Korpo Plaza. This iconic version of the Budget Arms Carnage version has a unique modifier that changes the type of damage to chemical and launches three additional projectiles with a ricochet. However, fans have discovered another useful, and maybe unintended feature when using this weapon.

In the Cyberpunk 2077 subreddit, user Extreme_Lab1507 posted a video showing how using Guts can prevent players from taking fall damage. To prove their point, they decided to jump off a tall building, especially from the balcony of the Dark Matter nightclub in Westbrook. As they quickly approach the ground, they point the shotgun straight down and shoot, apparently landing without a scratch, although alerting the police about hitting a civilian.

Although the video has impressed and surprised many who leave comments, some have tried to determine how this is possible. One user suggests that since Guts is actually a Carnage shotgun, which is a high-body weapon, the recoil from the recoil is strong enough to throw the player back, so aiming at the ground will presumably reduce the fall rate. It is unlikely that CDPR will fix this, since it is generally quite harmless, but for players who want to get their hands on this weapon, Rebecca Guts shotgun can be found near the Arasaka Tower in Korpo Square, half-hidden in the bushes next to three monks and a holographic koi fish.

Cyberpunk 2077 has already been released for PC, PS4, PS5, Stadia, Xbox One and Xbox Series X.

Hawk and the Winter Soldier: Why not a series or a...