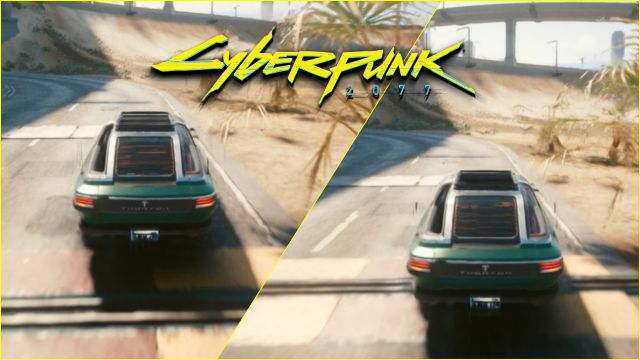 A new mod takes advantage of NVIDIA’s DLSS 2.2 version to improve the image quality of the CD Projekt RED game in its PC version. Cyberpunk 2077 has received this week a new mod in its PC version that improves the image quality of the game thanks to the use of NVIDIA’s DLSS technology. Update 2.2 of this mod increases image fidelity using these supersampling techniques, especially when the camera is shaking. The result is a significant reduction in ghosting and the appearance of screen artifacts when using low resolutions.

Below, we can see two images that compare the previous version of Cyberpunk 2077 and another with the DLSS 2.2 mod applied. As explained, this update replaces the DLSS 2.1 file and uses the one already incorporated by Ubisoft in the Rainbow Six: Siege database.

What is NVIDIA DLSS

DLSS is called to be one of the technologies of the future in the world of entertainment and, more specifically, the video game sector. A less powerful computer can, thanks to the use of this technique, offer higher quality images even if it renders them natively at a much lower resolution. NVIDIA itself defines DLSS (deep learning supersampling) as an AI rendering technology that “boosts graphics performance thanks to dedicated Tensor core AI processors in GeForce RTX GPUs.” DLSS takes advantage of the power of a deep learning neural network, in such a way that it manages to increase the frame rate per second of the image and generate a more attractive and sharp result during gameplay.

There is even talk that a future new Nintendo Switch that renews the built-in NVIDIA chip can use this innovative technology, which would make it easier for an image in native 1080p resolution to be viewed on the screen with an output of 4K resolution scaled with this technique. . At the moment, Nintendo has not said anything about it.

Cyberpunk 2077 is available on PC, PS5, PS4, Xbox Series X | S, Xbox One, and Google Stadia. Soon — at the end of the year — the game’s next gen update will be released, free for users who have acquired the title on PlayStation 4 or Xbox One.

Free Fire: weekly schedule from July 14 to 20 with Angelic...