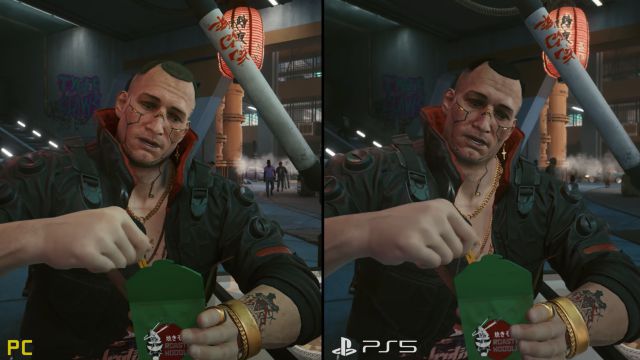 The title of CD Projekt is revealed in a new video comparing the technical performance of the computer version with that of the PlayStation 5.

CD Projekt RED continues to work on the console version of Cyberpunk 2077 through patches and updates. Just a few days ago, the game received version 1.05 on PS4 and Xbox One with improvements that we detail in this article and in this cross-platform comparison. It is time to see if the technical performance of the title is currently up to the task to face the Night City computer.

In this new video published by the Benchmarks For Gamers channel, a computer with an MSI RTX 3090 Gaming X Trio GPU accompanied by an AMD Ryzen 9 5950X CPU and a 32 GB RAM has been used to take the footage in Ultra configuration (and 4K resolution), Ray Tracing enabled and DLSS in quality mode. For its part, the video sequences captured on Sony’s domestic platform correspond to a copy of Cyberpunk 2077 in version 1.05 via backward compatibility (native PlayStation 4 game).

As we can see, apart from the crashes and crashes, the lighting of the game has improved and the textures present fewer problems than in previous versions; although there is still almost constant pop-in, tearing and frame drops in the city, Night City.

Cyberpunk 2077 is withdrawn from its sale to the public via PS Store; both on PS4 and Xbox One perform well below expected standards, prompting Sony and Microsoft to agree to the request for refunds on digital purchases. For its part, CD Projekt will cover physical returns until this December 21st. The situation is very delicate for the Polish company at the moment, since from Warsaw several investors and lawyers are considering suing the company for “misrepresentation” in order to obtain economic benefits. The shares, meanwhile, continue to fall.

Cyberpunk 2077 is out now for PS4 (physical format only), Xbox One, PC, and Google Stadia. In PS5 and Xbox Series X | S it is possible to play via backward compatibility with the editions of the last generation; the next gen version will be released in 2021.

A new feature in WhatsApp for iPhone