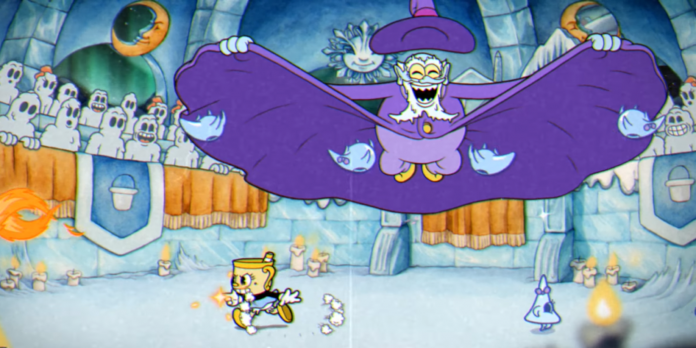 In the DLC Cuphead: Delicious Last Course, there is a boss on the east side of the island named Mortimer Freeze. A snow-covered area with a stone bridge leads to the igloo, where you can find Mortimer Friese. The fight with Mortimer Freeze consists of three stages with different types of attacks at each stage. Cuphead players who want to fight a cold boss will need some tips to avoid his attacks and effectively strike back.

It may take several attempts to fully understand Mortimer Freeze’s attack patterns, as in other boss battles such as the Chess Knight in Cuphead. However, once Cuphead players reach Mortimer Freeze’s lair, they will face the boss in an arena surrounded by snowmen. Mortimer Freeze, dressed in a purple wizard costume, takes three forms during a boss battle. The first Mortimer Freeze form that players must defeat is his flying wizard form, followed by his snowman form on the ground, and then finally the snowflake form.

Players must deal with attacks from all sides and always keep an eye on Mortimer’s position to finish the battle. The first phase involves aerial attacks, when Mortimer Freeze flies and hovers in the air. Then the fight moves to the ground, and in the last fight, players jump in the air along with rotating platforms, attacking Mortimer. If players stay away from Mortimer’s attacks and counterattack quickly, they won’t be buried in this Caphead graveyard where a secret area can be unlocked.

The first phase includes three aerial movements that Mortimer Freeze will use to attack players.

• First Attack: Summon four ice minions that go to the player to deal damage to him. These minions can be destroyed with just a few hits. • Second attack: Throwing cards from a crystal ball that fly in a straight line to the player. The pink card can be parried.• Third attack: stopping in the air and driving an orange whale into the ground. There is a gap between the swing rotation and the kick, so it’s easier for players to dodge it than many of the attacks of other bosses, such as Sheriff Esther Winchester in Cuphead.

In the second stage, Mortimer covers himself with snow to turn into a snowman. This phase adds new attacks to Mortimer’s set of techniques.

• First Attack: Mortimer rolls or jumps from one side of the stage to the other. It will be easier for players to jump over the rink while staying in the center of the stage to prepare. • Second Attack: Mortimer transforms into a refrigerator and shoots ice cubes, which break into smaller pieces when they hit the ground. Frozen treats also shoot the player one at a time. Dodge and jump over the cube, shooting treats. • Third Attack: Mortimer pierces the ground and four blades fly out one after the other. The edges on the ground are formed to warn the players where the blades will pop out. These simultaneous, complex attacks are part of what makes Cuphead: Delicious Last Course a very strong DLC.

The third phase brings players to a set of rotating platforms, while Mortimer flies inside a snowflake. This adds three new movements to Mortimer’s repertoire.

• First Attack: Mortimer shoots buckets that turn into three moons flying in the shape of a crescent moon. Being near Mortimer during this attack gives you more opportunities to dodge. • Second Attack: Mortimer shoots from his eyeball, which explodes with a vertical beam of light every few seconds. Jump over the eye as it floats and dodge the rays. Third Attack: Mortimer flies out of snowflake and circles the platforms before returning to snowflake. Four snow cones fly to the center of the screen, and then fly back. The sequins indicate where the snow cones will appear in the game Cuphead: Delicious Last Course.