Home Entertainment Cult Of The Lamb: The best buildings of divine inspiration that need... 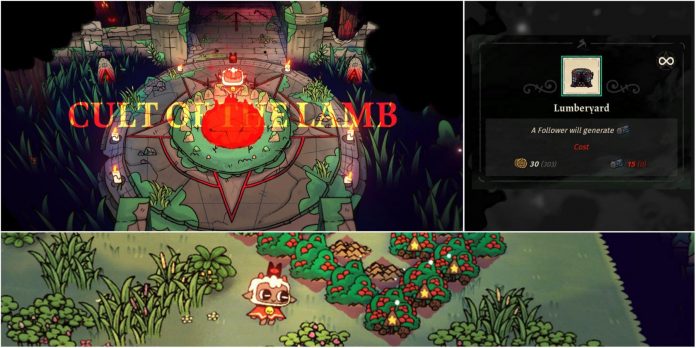 Massive Monster’s Cult of the Lamb is a deceptively simple roguelite on the outside. Players instantly enter the combat sections in the initial moments of the game and can feel as if they are playing any other procedurally generated dungeon-traversing adventure. However, all this changes as soon as the players successfully complete combat training and are carried away to their own small plot of land. Here, players get acquainted with the surprisingly deep mechanics of city management in Cult of the Lamb.

One of the most important aspects of this community builder is unlocking and protecting building recipes through Divine intervention. Players who receive enough loyalty from their followers will receive Divine Intervention points, which can then be used to unlock recipes through the “structure tree”. There are many buildings that need to be unlocked, and some of them are much more useful than others. Here are some of the best buildings that can be unlocked in the early stages of the game, when players are just starting to build their cult.

How to Unlock Divine Inspiration

Before players can unlock buildings, they first need to access the mechanics of Divine Inspiration in general. Fortunately, finding and unlocking this aspect of the game is guaranteed, as players will go through a series of guides that will help them figure out how to manage their cult. Once players have gone far enough, they will be given the opportunity to buy a Sanctuary. This sanctuary serves as a conduit of Devotion that players will use to gain Divine Inspiration points.

To gain Loyalty, players must interact with followers and order them to pray in the sanctuary. Over time, players will see the Sanctuary’s Loyalty lane fill up, and they can interact with it to get the saved Loyalty from it. Once the corresponding EXP-style loyalty lane is filled by obtaining “currency”, players will unlock a loyalty point that can be spent using the Sanctuary, which will give players access to a tree containing many building recipes.

When players first enter the “urban space” of the Lamb Cult, they will find many trees that they can cut down (or instruct followers to cut down), which will reward them with Wood. Wood is a useful primary resource, and players will use it during their adventures, especially in the earlier parts of the game. Unfortunately, once all the trees in the area are cut down, players will have to wait a few days (game time) until they grow back before they can collect a few pieces of wood from them again.

To combat this, players can unlock the Lumber Warehouse, which is part of the second level of the Divine Inspiration Tree. Unlocking and building a lumber warehouse will allow the player to build a village to work in the structure and produce wood.

Also available at level II, the shelter serves as a shelter for the followers summoned by the player, providing them with a place to sleep and escape from the elements. Villagers will automatically sleep at night, and when they lack a building or a sleeping bag, they simply fall asleep on the ground, which can be both dangerous and cause discontent on the part of the cult as a whole. To combat this, players will need to provide their followers with a special place to sleep.

Sleeping bags are available as an unlock on the first level, but they tend to break and need to be repaired every few nights. This can lead to a significant drain on resources, especially for wood, as players will have to constantly repair sleeping bags. By upgrading sleeping bags to shelters, players won’t have to worry about repairing them (although they may still break), and cult members won’t be left to fend for themselves.

One of the first things players should think about is a farm plot. This pleasant piece of land allows players to plant seeds, from which various items necessary for cooking and snacks then grow. Although players can find food during adventures and dungeon sweeps, this is not very reliable, since most of the food is found along random paths that are shared in each zone.

Food is an incredibly important commodity in Cult of the Lamb, as cultists can get angry, get sick or even die if they suffer from hunger for too long. Creating a series of farm plots and filling them with seeds can reward players with berries and other materials needed to feed their herd.

As soon as players begin to gather followers, they may begin to notice small “gifts” scattered around their camp. Cultists who consume food will have to throw away waste, and at first they will just do it anywhere. Players can clean up piles of manure themselves, which will reward them with fertilizers that can be used to accelerate the growth of crops on the farm.

The Matrix Resurrections Trailer; Date, Time and Where To See It...