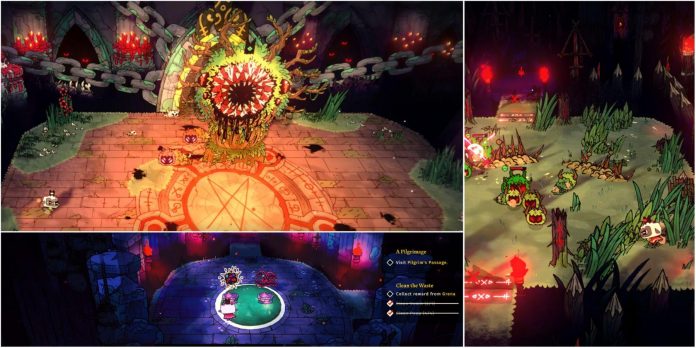 Although Cult of the Lamb is a robust village and community management simulator, combat is a big part of Lamb’s adventures. Players will need to dive headlong into several dungeons, overcoming hordes of enemies if they want to gather more followers, unlock recipes and increase their strength. It may be scary at first, but the Lamb itself grows stronger as it defeats enemies, giving players the advantage they need to free the Ancient God.

Cult of the Lamb has fairly simple combat mechanics and will drag players through a bit of training when they start a new game, but the dungeons will get harder as players progress through their adventures and increase their pack. Those who are struggling to get through some enemy-filled rooms located on the sides of each zone can use the following battle tips to help them stay on their feet.

While players may be tempted to run through each zone as quickly as possible, it’s best to spend time going through one specific area before moving on to the next. Even after players defeat the first main boss and unlock the next area, they will be able to return to the Forest of Darkness and fight with improved enemies, as well as refarm the One Who is Waiting to get materials, recipes and other goodies. Since each playthrough is different and will always offer different branching paths and events, players can constantly monitor this area, gathering followers, improving equipment, and discovering recipes before they eventually move on to more challenging areas.

Evasion is a very common mechanic in roguelike and soulslike games, giving players the freedom to dodge enemy attacks with timed evasions, which usually carry immunity frames (I-Frame) that protect the player from damage by dodging. Cult of the Lamb offers similar mechanics with the Lamb’s ability to dodge, but also allows players to dodge freely and without consequences. Dodging has nothing to do with stamina or cooldown between dodges, which essentially allows players to spam the roll to avoid enemies and projectiles.

Because of this, players should get used to dodging as much as possible. There are many encounters that require a tactical approach, forcing players to kill enemies one by one. Dodging can be a great way to switch positions to a specific enemy without putting the Lamb in danger.

Although players may be tempted to collect as many hearts as possible when they begin their adventure in the “Cult of the Lamb”, it is much better to give preference to damage rather than any health-related improvements. The Lamb is rewarded with one additional heart through training, resulting in their total number increasing to four, and players will have the opportunity to find Painful Hearts (which will not replenish and will disappear after taking damage) during each run.

Bosses and enemies at the beginning of the game are not that difficult to navigate, but they can have impressively large health bars. Players who decide to get extra health may face the fact that they will hack enemies and bosses as they progress through each zone. Most of the enemies in the first two areas are easy to dodge, and their attacks are predictable. Because of this, players must accumulate damage to deal with them faster.

At the beginning, players will enter rooms where there are only one or two enemies, which makes it easy to destroy the group without much dodging or changing positions. This changes quickly once players defeat their first mini-boss, as a burst of difficulty will see some rooms filled with enemies. A collision with such opponents can lead to disaster for the Lamb, especially with such a low health reserve at the beginning of the game.

Whenever players encounter a room with a bunch of enemies, they must quickly figure out which creatures have the least health and target them first. Enemies in Cult of the Lamb attack quickly, which means that a room full of enemies can quickly overwhelm players if they are not careful.

Unlock the Satanic summoning circle as soon as possible

Once players unlock the opportunity to build a sanctuary and gain devotion, they will gain access to divine inspiration. These unlockable building recipes can help players take care of their pack, but they are also able to help players in battle. Satanic Summoning Circle is one of these combat assistants that players should unlock as soon as possible. This is a level II structure, which means that players will need to unlock some other buildings before accessing it.

The Satanic Summoning Circle allows players to turn one of their followers into a useful ally who can strengthen them during dungeons or provide them with additional help in battle. Players who upgrade the circle to its Level III variant will be able to summon two followers at the same time.