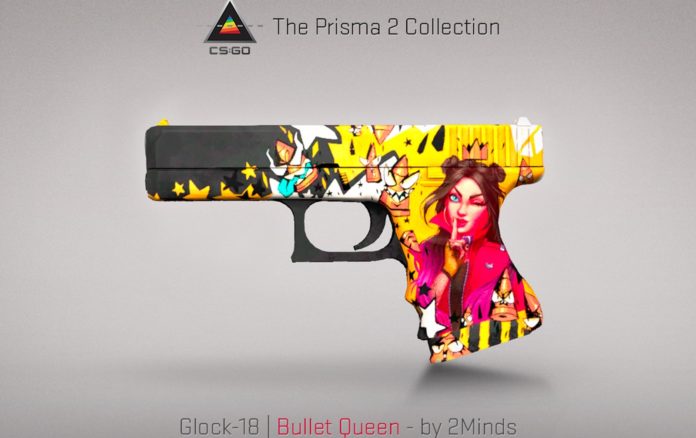 Counter-Strike: Global Offensive (CS: GO) received a new box of skins last Tuesday (31). The “Prisma Case 2” collection has 17 weapons with visuals created by the community, and one of the skins pays homage to Brazilian player Amanda “AMD” Abreu. The box is now available for purchase on the Steam store. Next, get to know the former Brazilian pro player who became a highlight in CS: GO and the new looks.

Amanda “AMD” Abreu is from Rio de Janeiro and is 25 years old. The player was a pro player and passed through several teams, such as BootKamp Gaming, Team One, Black Dragons and Vivo Keyd. Today, Amanda is a streamer and is also known for participating and promoting campaigns against machismo in esports and the gamer environment. One of the actions she participated in was “Closed with Mines”.

The Glock-18 skin received the name “Bullet Queen”. It was produced by the studio 2Minds, which has already made art for games like League of Legends (LoL) and Overwatch. AMD celebrated the launch on social media. She is the first Brazilian woman to win a skin in the shooting game.

But this is not the only reference to pro players in skins. In celebration of the 20th anniversary of the Counter Strike franchise, in 2019 the game received the box “The CS20 Collection”, paying homage to three well-known names in the scene. Olof “olofmeister”, from FaZe Clan, was remembered with the “Sacrifice” skin for Glock-18, Jake “Stewie2K”, currently Team Liquid, won the “Inferno” skin for P250. Finally, Jordan “n0thing”, ex-Cloud9, received the Tec-9 skin “Flash Out”.

The update marked the end of Operation Shattered Web, and with the update Valve also changed the list of available maps and made adjustments to the game. The Breach and Studio maps came out of deathmatch mode, which received Anubis and Chlorine – also added to casual mode. As for skins, some highlights are M4A1-S “Player Two”, MAG-7 “Justice” and MAC-10 “Disco Tech”. The chroma knife skins won six packs with four looks each: Marble Fade, Damascus Steel, Tiger Tooth, Rust Coat, Doppler and Ultraviolet.