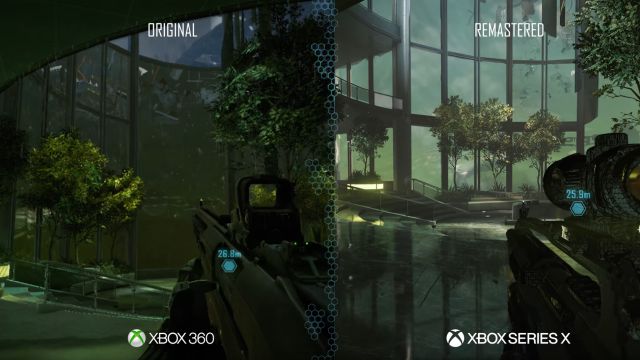 Crysis Remastered Trilogy reviews the visual improvements it has received compared to its original versions on Xbox 360.Crytek, responsible for the Crysis trilogy, takes muscle from the remastering of the three titles. The company puts the Xbox 360 version face to face with the Xbox Series X version. They point out that among the visual improvements we can find “high definition textures” and other “substantial” graphics impulses. In terms of resolution, it will use a dynamic solution that will vary between 1080p and 4K, while in performance it will aim for 60 images per second. You can see the comparison under this link.

Saber Interactive has been in charge of the visual washing of the three games. Although the first installment already has a few months on the market, the remaining two will arrive at some point in the remainder of 2021 on PS4, Xbox One, PC and Nintendo Switch; at the same time they will be compatible with PS5 and Xbox Series X | S. You will have two options to acquire them: either in individual format or through the trilogy package.

“We are excited to announce that Crysis is back in one package, remastered for the next generation of hardware,” explained Steffen Halbig, project leader. “Each game is enhanced to look and play great on today’s platforms, offering the quality Crysis experience for both newcomers and classic gamers looking to relive the adventure.”

So far no specific technical details have been shared, beyond resolution and framerate. We know that the new generation consoles will not have a native version, but will run with the compatibility service with the last generation. Of course, it will have the own improvements of running on superior, more liberated hardware.