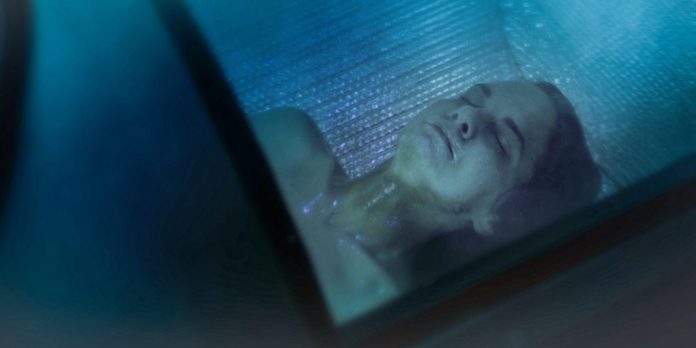 Movies that withhold their premise from the audience play a dangerous game. Take The Matrix, the most interesting thing about which is the idea of the world being a simulated mind-prison, and compare it with The Sixth Sense, which has arguably the most famous twist in movie history. While hiding it initially, The Matrix divulges what it’s actually about relatively early, giving its viewers plenty of time to enjoy it in all its glory. The Sixth Sense, meanwhile, holds its organizing principle back for as long as possible, leaving people to spend most of their time essentially watching a different movie. The twist’s power is valuable only in retrospect or on rewatch, and the most important question then becomes: Is the movie still interesting without its most interesting thing? The magic of M. Night Shyamalan’s enduring thriller is that the answer is a resounding yes. Cryo, however, is a different story. This low-budget sci-fi film is actually doing something quite clever, but by keeping it hidden until the final minutes, it leaves viewers with a character drama that just isn’t compelling enough to merit revisiting, even after learning how all its pieces fit together.

The feature directorial debut of Barrett Burgin, Cryo opens with a relatively simple sci-fi setup: Five people wake from cryogenically induced sleep to find themselves in a bunker with no memory of who they are. The Engineer who built the cryo-pods, designated 001 (Curt Doussett), is the first to remember that they are all willing participants in an experiment, each chosen by the Inventor (Michael Flynn) to test the effects of the device. Their amnesia, Engineer says, will wear off. The real problem is that the Inventor, who was supposed to wake them, is nowhere to be found. As they each begin to fall into their intended roles, they are plagued by the paranoia of knowing that the pods must be opened manually from the outside. Either one of the five is lying about when they wake up or there’s someone else hiding in the bunker watching their every move.

This contained premise bears all the signs of a limited budget, and had the movie been stronger in a few key areas, that could have played to its benefit. As much as science fiction can be a genre of epic scale, its fans are happy to trade big spectacle for big ideas, and for the longest time, it’s unclear if Cryo has any to offer. As it turns out, it does, and the last few minutes reveal what is actually a fun, thought-provoking concept at its center. Out of a commitment to avoiding spoilers, this review won’t unpack it, which is a shame, because it is by far the most substantial bright spot. In a better film, it’s the kind of revelation that would make someone want to watch it again with understanding eyes. But weighing that option against the reality of sitting through the bulk of Cryo a second time dampens its appeal.

Burgin’s movie positions itself well at first by generating a lot of mysteries both the viewer and the characters want answered, but the narrative ends up wasted by leaving those characters woefully underdeveloped. Each of the participants gradually remembers their profession, which determines their role on the team: Engineer/001, Psychologist/002 (Jyllian Petrie), Biochemist/003 (Morgan Gunter), Soldier/004 (Mason D. Davis), and Doctor/005 (Emily Marie Palmer). These jobs so transparently determine what they talk about and how they talk about it that they never come across as full-fledged people, with lives and interests and motivations outside of the plot functions they serve. With the key to unlocking the movie’s larger ideas held back, the characters needed to be the viewer’s path to getting invested in the story, and without anything compelling in them to latch onto, any sense of stakes dissipates. How is the audience supposed to care about what happens to these characters when they can’t even care about them?

The way they’re written might be the chief culprit, but the cast share some of the responsibility. The experience ends up something like watching a murder-mystery dinner party, with each person’s character packet containing a “secret” motivation that only comes out with a more sustained line of questioning. It’s difficult not to think of other contained paranoia stories — like Dan Trachtenberg’s 10 Cloverfield Lane, which even employs a similar is-it-poisoned dynamic to keep the outside world closed off — and how they function as acting showcases, giving performers the chance to really show what they can do when surrounded by little that could pull attention away from their work. Viewers will find no such reward for their attention here. While not without merit, Cryo is so bland for most of its runtime that not even a transformative ending makes for a net-positive viewing experience. The only consolation for those who do give their time to it is the chance for pretty interesting discussion about what this review could not get into.

New Tales from the Borderlands Could Be a Tantalizing Answer to...