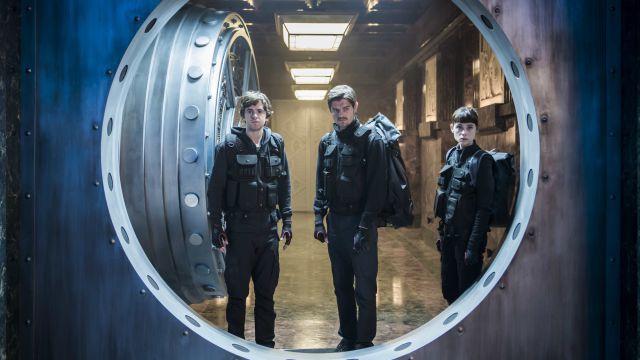 Way Down: Jaume Balagueró’s new film moves between the classic schemes of robbery cinema and the Hollywood spectacle. Way Down is one of those films that when you start watching you already know how it will end, his scheme has been repeated assiduously since in 1973 George Roy Hill laid the foundations of the genre with his extraordinary The Coup. With different evolutions we have already seen that story of an impossible robbery in which first you have to gather a group of specialists of a diverse nature, then the perfect plan is complicated by an indeterminate number of unforeseen events and at the end, after some script twist and certain moments of tension, the criminals, who are usually the good guys, take the loot. Reservoir Dogs (1992), Habitual Suspects (1995), Ocean’s Eleven (2001) or Hidden Plan (2006) triumphed because they knew how to add new ingredients to that masterful recipe or they got off the track in the middle of the trip. Way Down doesn’t do it, it sticks to the canon and that takes away a certain freshness and leaves it several steps below all the previous ones.

The story centers on the theft of the diary of the legendary corsair Drake, which by chance of fate is kept in the security chamber of the Bank of Spain, the most impregnable place in the world and whose security measures make it impossible not even to approach it. Liam Cunningham (Davos in Game of Thrones) is a treasure retriever who sees how Spain snatches from him in court what it has taken him so long to find. With the covert help of his Majesty’s government and along with a group of robbers, he leads a plan to recover the notebook. The story is framed within the time frame of the World Cup in South Africa, the development of which is of paramount importance in the outcome.

Freddie Highmore, known in Spain for his portrayal of Charlie and the Chocolate Factory, Bates Motel and The Good Doctor, is the lead actor and one of the producers of the film. The young English talent once again plays the role of an introverted genius capable of solving any problem that arises. He is a character made to measure for him and his weight on the film overshadows, although I’m not sure this is for the better, that of the rest of the teammates. Veteran team leader Liam Cunningham builds the most believable character of all. He moving well between the morality of the robbery, his personal values, and the justice of the mission. On the Spanish side, both José Coronado and Luis Tosar, two of the greatest talents in our cinema, are underused. The first because he is pigeonholed into a role, that of the Bank’s security chief, which does not present any edge. A Manichean figure that is exaggerated is not very credible. As for Tosar, as his achiever, he is wasted on a character more suited to Javier Cámara than to Tosar’s imposing presence, who nevertheless achieves a remarkable performance. The rest of the cast is made up of Àstrid Bergès-Frisbey, recovered for the cinema, Sam Riley, Axel Stein, Famke Janssen, Daniel Holguín and a funny Emilio Gutiérrez Caba, in the role of Governor of the Bank of Spain. In general, the Spanish team is imposed on the outsiders, although not by as much difference as the line-up assumed.

Transformers: Ron Perlman Returns To The Franchise As Optimus Primal