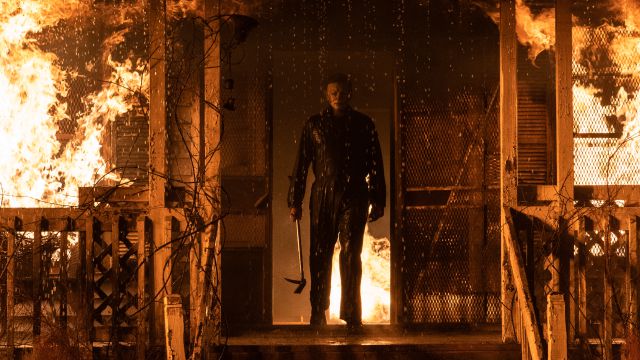 Halloween Kills: The persevering Michael Myers franchise tries to raise its quality by providing a social and nostalgic dimension to its latest installment. He doesn’t get it.

John Carpenter created in 1978 with the movie Halloween a formula as simple and effective as his great soundtrack was. A madman escaped from a madhouse kills left and right on Halloween night. He wears a mask, a knife and very bad milk. And he’s done. Given the success of the film, of course, this simple recipe had to be seasoned with small details and characters to launch the successive sequels.

The slasher genre is very true to its clichés. You know, a somewhat supernatural individual with past trauma who kills innocent teenagers, who tend to run slower than the killer walks. Girls with little clothing also abound to favor stabbing. Something important in the murderers is that they have a hallmark (the mask is the most common, but the striped sweater has also been worn a lot) and of course, to give it color, the murders must be full of blood, fine offal and screams, many screams. There are more clichés that the faithful to this genre accept with open arms and very dubious twists that go well for their wide slots in order to receive their reason for unjustified homicides. But even with these facilities, Halloween Kills gets stuck in the throat.

Use two powerful and unnecessary narrative weapons to justify death scenes and scares (the latter inexcusably rare). Nostalgia and social reflection. Yes, yes, man is a wolf to man and stuff. Who is more monster? The monster or the human pack with a thirst for revenge? Why are these things being done? Not only are the scenes that try to give this social-philosophical dimension to the film imposing and long, but they are somewhat comical. James Whale got it in Frankenstein and David Gordon Green’s attempt is appreciated as a solution to elevate the film and why not, the genre, but he doesn’t get it. He kills the beat and ruthlessly kills the atmosphere. What he does get is to wish even more for the slasher scenes to come. In this case, some of them are spectacular and well shot, but they are not the best of the genre. I don’t want it to be misinterpreted, the attempt is unsuccessful but recognizable.