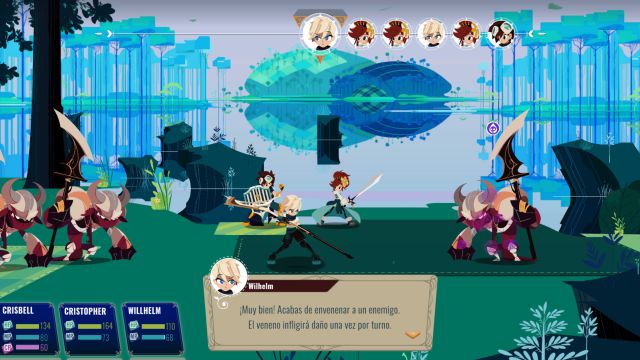 Cris Tales: A love letter to the jRPG that extols its classic and modern virtues, but hits an outdated stumbling block. When we look through the mirror of the past, we smile when we remember great titles in the history of digital entertainment. If we also adore dragons, dungeons and magic, we will contemplate how role-playing video games immersed us in worlds full of wonders and dangers and emotional stories. Dragon Quest and Final Fantasy became the paradigm of what we know as jRPG and Rieko Kodama broke the molds of the genre to take it to a new level with Phantasy Star. Numerous titles have marked their own mark and paved the evolution of a modality of Digital role continues to captivate us today. Cris Tales, from Dreams Uncorporated, has become a love letter to the jRPG in its most classic aspect, but seen from the prism of the future. A very attractive adventure for this summer that we can enjoy on PC, PS4, PS5, Xbox One, Xbox Series and Nintendo Switch.

A lively beauty with character

Maintaining a balance between the traditional and the modern is a complex challenge and Cris Tales, although showing the intention of offering a refreshing experience, is unable to renounce certain conventions that are now obsolete. And yet, it ends is a work with its own personality, full of differentiating elements that are very attractive.

As we have already seen since its first trailers, Cris Tales is a striking title for its graphic section, and its audiovisual charm not only remains in a hand-drawn 2.5 D, but also in a delicious imaginary and the exuberance of a universe of its own . The kingdom of Crystallis is full of life, with its own regions, its own culture and its own peoples and races, which go beyond the usual elves and dwarves that populate the rest of the works of sword and witchcraft. The explosion of colors that floods us in each location is present in every detail, from the preciousness of the settings to the very design of the objects we use, inspired by tender and beautiful themes. From rainbow tea, apple juice and rose necklaces, everything is part of a world built from a celebration of the delicate and the beautiful. Its regal soundtrack enhances the tone of Cris Tales, but it’s not as memorable as the music we’ve heard on other jRPGs. It is also worth mentioning a very careful Latin Spanish localization, and its dubbing in English creates an even greater immersion.

Netflix Could Bring A Clips Feature Like Twitch Does

Diablo Immortal: Tips that every beginner should know