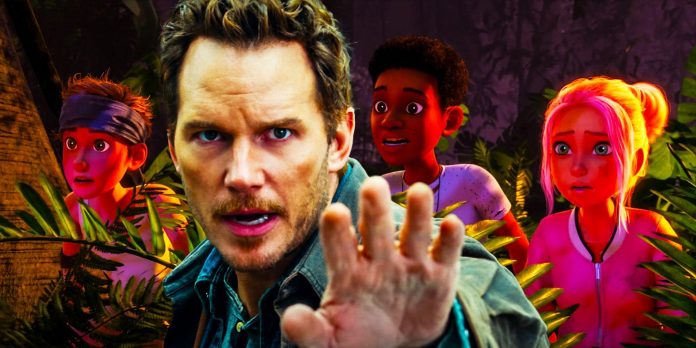 The finale of the 5th season of “Jurassic World: Cretaceous Camp” from Netflix, which is also the finale of the series, leaves a hole in the plot of “The Dominion of Jurassic World”. In season 5 of Camp Cretaceous, teenage campers dubbed the battle Nublar Six to thwart Mantah Corp’s plan to sell its technology that can remotely control dinosaurs. Mantah Corp CEO Daniel Cohn (Andrew Kishino), who is also Kenji’s (Ryan Potter) father, has made a business deal to sell his dinosaur technology to Dr. Lewis Dodgon (voiced by Andrew Harrington) from BioSyn.

In the 4th season of the Cretaceous, Six Nublar – Darius (Paul-Mikel Williams), Brooklynn (Jenna Ortega), Sammy (Rainie Rodriguez), Yasmina (Kausar Mohammed), Ben (Sean Giambrone) and Kenji -are shipwrecked on Mantah Corp. The island after they finally escaped from Nublar Island. There, the children learned that Mantah Corp had hired Dr. Mae Turner (Kirby Howell-Baptist) to develop the technology of mental control over dinosaurs using implanted microchips. Then the actions and behavior of dinosaurs could be completely controlled using tablets or controllers similar to video games. Indeed, Mantah Corp intended to create illegal dinosaur fighting clubs to attract wealthy investors. When Nublar Six thwarted this plan in the 5th season of Camp Cretaceous, Mr. Cohn decided to sell his BioSyn technology, and Lewis Dodgson personally met with the CEO of Mantah Corp on Nublar Island to make a deal.

BioSyn used Mantah Corp technology to control dinosaurs in Jurassic World Dominion, but the ending of the 5th season of Camp Cretaceous creates a hole in the plot. In “The Nublar Six”, the kids trick Mr. Cohn into thinking that the island of Mantah Corp is about to self-destruct. Daniel abandons Kenji on the island and runs away, although he is later arrested by the police. Mr. Cohn did get the password from the campers to restart the chip-making process, which they disabled, but with Daniel’s arrest and the island remaining a secret, how did BioSyn end up getting the technology? Although it was never mentioned, the simplest solution would be that Dodgson and BioSyn bought the remnants of Mantah Corp after the fall of Cohn. Then Dodgson will have Mantah Corp’s technology, and this can be traced back to how BioSyn also acquired the intellectual property of InGen and Masrani Global years before Jurassic World Dominion.

Cretaceous Camp seasons 4 and 5 were mostly devoted to explaining how Mantah Corp had the technology to control dinosaurs in the Jurassic World Dominion. Dodgson (Campbell Scott) used this technology at the end of the film when the jungle surrounding the BioSyn Dinosaur Sanctuary in the Italian Dolomites caught fire. BioSyn was able to drive the dinosaurs into the inner sanctum thanks to Mantah Corp technology, where the final battle between T-Rex, Gigantosaurus and Therizinosaurus took place.

Neither Mantah Corp nor Camp Cretaceous are mentioned in Jurassic World Dominion, but the animated series reveals important aspects of the film. Along with Mantah Corp.’s dinosaur control technology, the 5th season of Camp Cretaceous also provided an explanation for one of the Dominion’s biggest Easter eggs and mysteries: Where did Dodgson get a can of Barbasol that his younger self gave Dennis Nedry to commit industrial theft in Jurassic Park? It turns out Dodgson stumbled upon a can of Barbasol when he visited Isla Nublar to make a deal with Daniel Cohn in season 5 of Jurassic World: Cretaceous Camp. the remnants of Mantah Corp to honor Cohn’s memory and fulfill their deal.