Home Tech Credit Card That Puts Your Monthly CO2 Limit To Your Spending: Do... 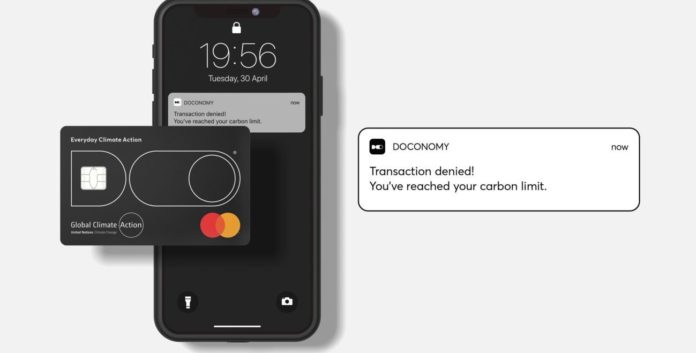 Swedish financial technology company Doconomy launches the world’s first credit card, which tracks purchases based on carbon emissions. The card, which has a very stylish design, can limit the spending of users based on its impact on the climate.

Doconomy, a Swedish-based financial technology company that aims to provide sustainable banking services for everyone, launches ‘The Greenest credit card in the world’ Do Black. The company, which has developed the new generation credit card in cooperation with the US financial institution Mastercard, is making a new contribution to global climate change efforts.

Do Black shows how much carbon footprint each spend
So, how will the card developed by Doconomy achieve this? The answer is simple: By setting monthly CO2 limits. Do Black, which will set a certain CO2 limit every month to cardholders, will refuse to spend on users exceeding this limit.

Unlike traditional credit cards, which offer various advantages to encourage more consumption, Do Black not only measures the impact of consumption on nature, but also puts a quota on these expenses. Users can see how much carbon emissions each purchase makes via the Doconomy app.

Do Black to reject spending for users who exceed monthly CO2 limits
According to the Swedish Environmental Protection Agency, a Swede produces 10 metric tons of CO2 greenhouse gas per year, 60 percent of which is based on consumption. Aiming to reduce the carbon footprints of the users with the credit card it has developed, Doconomy aims to create a sustainable and healthy future for everyone with this bold initiative that reshapes its consumption habits.

“Many companies in the world are taking important steps to reduce their carbon emissions,” said UNFCCC general secretary Patricia Espinosa, who made comments on the project. People are now beginning to make more informed decisions about what they are buying. For this reason, we welcome this initiative in the field of economy ”.

The move that users will not like from WhatsApp

PS5 back on sale in the UK? Details