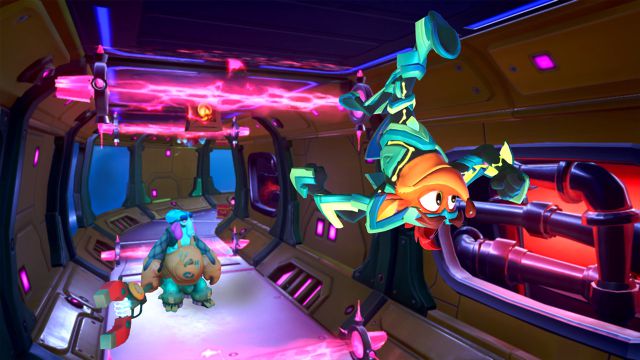 Crash Bandicoot 4: It’s About Time, Nintendo Switch Review: An Exemplary Port We assess all aspects of Toys for Bob’s conversion work, with the strengths and weaknesses of the long-awaited Nintendo Switch version.

When Activision announced Crash Bandicoot 4: It’s About Time last year, lovers of the marsupial saga had reason to be excited, it was still a declaration of intent: the first numbered installment of Crash in more than twenty years. This time, far from Naughty Dog, but near a studio that knew perfectly the genre of platforms after the Skylanders saga and the Nintendo Switch versions of the remastered trilogies of the character himself and Spyro a few years earlier.

Toys for Bob made it clear to us that this fourth episode is an unavoidable date for fans of both the series and the genre; So when it was announced that the Nintendo Switch version was going to be a reality this March 2021, that initial illusion returned intact. And yes, we’re in luck: Toys for Bob has made a model port of Crash Bandicoot 4: It’s About Time on Nintendo Switch.

Sacrifices and cuts with a result of remarkably high

We understand that if you are reading this review it is because you want to know how the port of Crash Bandicoot 4: It’s About Time is on Nintendo Switch; especially after the adaptation work of both Crash Bandicoot N. Sane Trilogy, Spyro Reignited Trilogy and Crash Team Racing: Nitro-Fueled, whose conversions remained in the remarkable, with sacrifices, especially the portable mode. Make no mistake: the great attraction of these adaptations to the hybrid console is the possibility of playing them on a laptop. Now, not everything goes. It is not to anyone’s liking to enjoy these great titles in resolutions that drop down to 540p, because that is below the standards that the console can offer (720p); so it’s fair to expect that visual fidelity to just be achieved.

This edition succeeds, but not always. Let us explain to you how our experience has been revisiting this fourth canonical episode of the series, a true essential of the genre that was legitimately qualified to carry the four in its name.