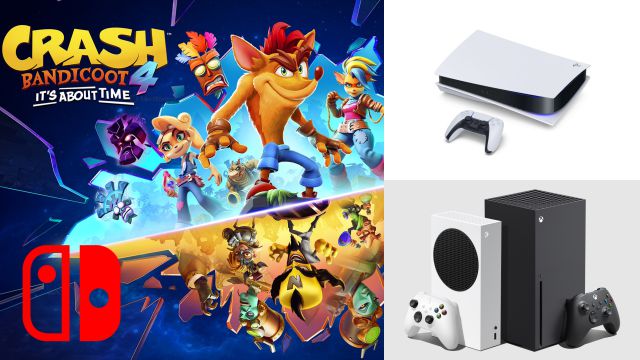 Crash Bandicoot 4 confirms its release on Nintendo Switch on March 12. The same day will do the versions of PS5 and Xbox Series X | S; later on PC.

Crash Bandicoot 4: It’s About Time confirms its arrival on Nintendo Switch. Launching on March 12, it will go on sale at a price of 49.99 euros; is now available to pre-order on Nintendo eShop. On the other hand, the same day the new generation version will be enabled: the game will take advantage of the new functions of PS5 and Xbox Series X | S. It will also debut on PC via Battle.net sometime this year.

Those who purchased Crash Bandicoot 4 on PS4 and Xbox One will receive the next-gen port at no additional cost. Toys for Bob confirms PS5 and Xbox Series X will run at native 4K resolution and 60 frames per second; meanwhile, on Xbox Series S it will have the same framerate target, but the resolution will be rescaled to 4K. Reduced loading times and the possibility of being able to take your original game to these are expected. To make the transfer on PlayStation you must have the version of the last generation installed; on Xbox it is automatically synced with your profile cloud.

In the case of PS5, the game will make use of the technologies that incorporates the fifth generation of PlayStation. It will use the 3D Tempest audio, the interface activity system and the adaptive triggers of the DualSense. IGN gives an example of weapons such as the Neo Cortex pistol: when we fire a weapon, we will notice the resistance in them. As with the Nintendo Switch version, it can already be reserved for 69.99 euros in the Xbox and PlayStation digital stores.

As we can extract according to the statements of Activision, the publisher promises more news in the framework of the celebration of the 25th anniversary of the franchise during this 2021. Although the plans have not transpired, they reveal that the fans “can expect a lot of activities ”.

Resident Evil: comments on the port of PS1 classics

Xiaomi Reveals That It Has Been Patented For A Smartphone That...