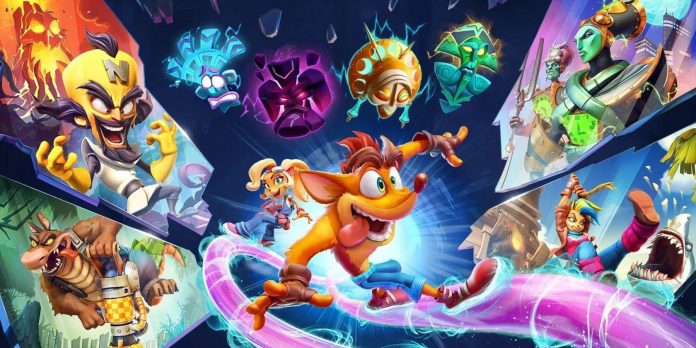 “Toys for Bob” has recently undergone major changes. In 2020, the co-founders of the game developer Paul Reich III and Fred Ford left the studio to found a new team. It was also announced that under the new management, Toys for Bob will become a Call of Duty: Warzone support studio. However, the developer of Crash Bandicoot 4: It’s About Time and Spyro Reignited Trilogy may not have finished working on their own projects yet. A Twitter post from Toys for Bob hints at announcements of some upcoming products.

In a recent tweet from Toys for Bob’s official Twitter account, a photo of the company’s “Wall of Games” was posted. There are 17 picture frames on the wall, each of which contains the lid of a box with a game and a disc. The games go back to the original Toys for Bob games, Star Control and its sequel Star Control 2. There is also an eighteenth frame on the wall with “???” marked inside to indicate that Bob’s toy fans may be in for a surprise.

The message attached to the photo also hints at an upcoming surprise. “It’s very convenient that we have more space on the wall…” says the corresponding message with a winking smiley face. It is implied that a new project is being developed in “Toys for Bob”. This may mean there will be an announcement soon, although it may just be “Bob Toys” wanting to share the news that something is in development, even if they can’t talk about it for some time either.

As for what the new project might be, there is no clear answer. Toys for Bob working on Call of Duty: Warzone is a new direction for the studio, which may lead to a new direction for studio projects. Perhaps the Call of Duty: Warzone experience is intended to help the team move on to FPS development, where it could work on remasters, remakes or Activision’s past hits in this genre.

Fans of “Toys for Bob” will know that the studio’s modern wheelhouse remains platformer games. Crash Bandicoot 4: It’s About Time was an amazing success, as was the remaster of Spyro Reignited Trilogy. Bob’s toys may well be working on a new Crash Bandicoot or Spyro game. The fans would certainly like to see this happen.

Needless to say, everyone will be watching the new “Toys for Bob” announcement, which will be presented at various upcoming gaming events. It may be a coincidence, but next week there will be a Gamescom Opening Night Live, which will certainly feature several major games. There is no certainty that information will appear from Bob Toys in the near future, but one confirmation that a new game is in development should be enough to keep fans in the foreseeable future.