Home Sport Coutinho and Bayern have a party and destroy Bremen 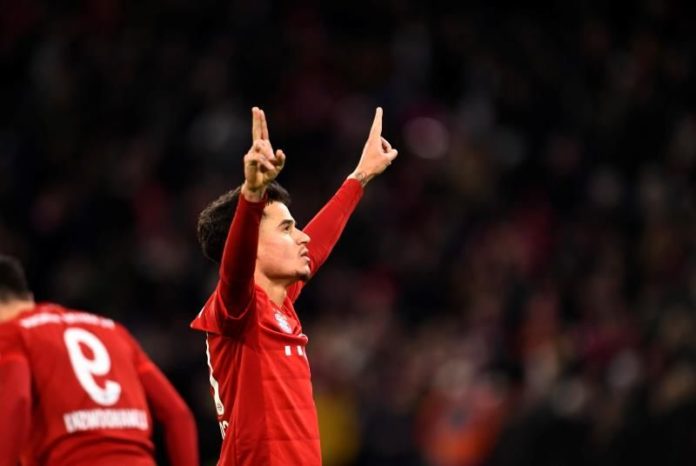 Bayern, led by an extraordinary Philippe Coutinho, gave a party by defeating Werder Bremen 6-1, leaving a minicrisis after two consecutive losses in the Bundesliga against Bayer Leverkusen and Borussia Mömchengladbach.

The Coutinho match, with three goals and two assists, has been the best of the Brazilian since his arrival in Munich and can serve to start dissolving the optimism that spreads around the possibility that Bayern makes use of the purchase option what’s wrong with it.

The victory allows Bayern to climb positions, so far it is fourth, thanks to Bayer Leverkusen fell 2-0 to colist Cologne and Freiburg lost 1-0 to Hertha Berlin.

However, in the first half Bayern had to suffer and it was believed that what happened in the last two commitments in which Bayern could not translate his superiority in the field into goals was going to be repeated and had ended up falling due to defensive errors .

Against Bremen, the first ball that reached the goal of Manuel Neuer was goal. In a counterattack, Jerome Boateng could not with the speed of Milos Rashica who managed to reach the area and scored with a strong shot.

Before there had been five clear occasions for Bayern and the ghosts of the last days began to hover over the Allianz Arena. In 40 Robert Lewandowski lost the tie, being only before the goal Jiri Pavlenka.

However, at the end of the first half Bayern shook off the ghosts. In the 45th minute Coutinho tied, with an empty door and center from the right of Serge Gnabry who had received a great pass to the area of ​​Joshua Kimmich.

In the first half discount, Lewandowski tied with a shot inside the area to pass Coutinho and ended the divorce with the network he had in the last two days.

Then everything was easy for Bayern. The third was done by Coutinho in 63 with a petroleum jelly inside the area at Alaba’s pass

The doubts that could remain were dissipated in the 72nd minute when Lewandowski, after receiving a cross pass from Thomas Müller, marked the fourth with a shot inside the area.

The hand was completed by Müller himself in the 75th minute to the center of Coutinho who would finish crowning his personal party by scoring a goal in 78 with a shot to the squad from outside the area.

Borussia Dortmund also thrashed and won 0-4 at home against Mainz.

Reus opened the scoring in the 32nd minute with a right-footed shot from outside the area. The play began with a corner kick taken in short, Thorgan Hazard got the ball into the area, Hummels returned it head first and Reus scored with a top shot

Sancho scored the second in 67 in a counterattack that began with a ball recovered by Axel Zagadou on the edge of the Dortmund area. Zagadou himself commanded the kickback, resorted to the entire field and when approaching the area he served it to Sancho who scored with a right-footed shot

The final sentence came in the 70th minute when Thorgan Hazard scored the third with a shot from outside the area and Niko Schulz nailed the tip in 84.

Leverkusen interrupted the good run in which he was falling against Cologne, which with the victory managed to leave the basement of the classification.

The expulsions of Dragovic and Leon Bailey in the second half, which left the aspirin team with nine men, helped the victory of the Colony that was won thanks to goals from Colombian Jhon Córdoba and Sebastian Bornauw.

Hertha, meanwhile, defeated Freiburg at home 1-0 with a goal from Vladimir Darrida and Paderborn and the Berlin Union drew 1-1.