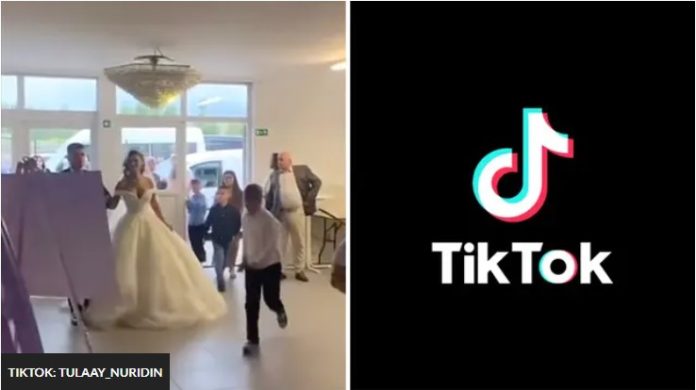 The couple’s big entrance at their wedding was “ruined” by a group of running kids in a viral TikTok posted by the bride.

In the already deleted clip, which has gained more than 17 million views, the bride wrote “Thank you for recording” when she shared the incident in the short form application.

The video begins with the bride and groom entering the wedding reception hall. As they began their journey to the red carpet, a family followed them in. The couple moved aside and waited at the door.

At that moment, six children burst through the door, ran up and ran past the bride and groom, who had just entered the red carpet, into the hall and lined up near the red carpet, delaying their big exit.

“POV: You didn’t want kids at your wedding,” the video overlay read.

In the comments, many TikTok users were upset for the couple, as they attacked the parents of rowdies.

“I always wonder about these kids, what were the parents thinking? There are so many situations in which a parent should intervene,” one of them wrote.

“I would be angry. There are so many ruined photos because of this. Like, parents could at least make them wait. It seemed deliberate,” another added. “Hire a damn babysitter. It’s not your day, it’s the bride’s day. She’s not selfish, these parents,” commented a third.

Others shared what they would do if they were in the couple’s place.

“If I were the groom, I would stop, tell our photographer to delete the video, we’re going again, but only after the kids leave!” said one user.

“Actually I would put a guard at the entrance and kick them out,” another shared. “Although these are already big children. I swear, if I were a bride, I would use my voice of a lifeguard and curse them,” said a third.

TikTok is often a great place for wedding inspiration, but it is also popular because of unsuccessful weddings. Recently, a wedding guest went viral on TikTok after the groom slapped him for ruining the cake. Then the photographer went viral after breaking down in tears because they deleted all the photos from the wedding they were working on.

Harry Styles Got in The Eye of a Sweet During a...

How to Complete Island Hopper Quests in Fortnite, Chapter 3, Season...