Home Celebrity Could BTS and Lil Nas X have a new collaboration? 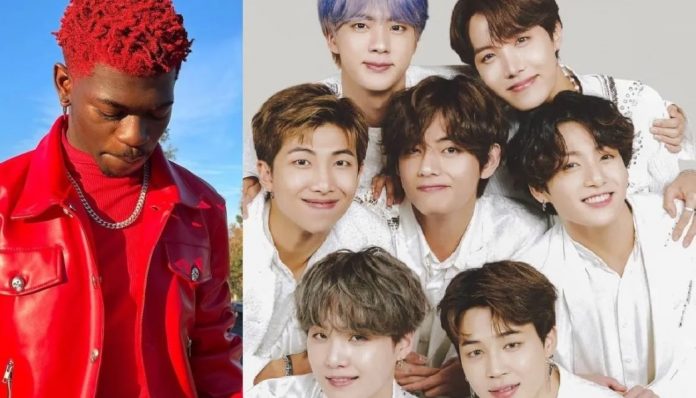 BTS and Lil Nas X already shared the stage once and the result was surprising. The Georgia-born recalled their collaboration at the GRAMMYs and thought about creating a song with the Bangtan Sonyeondan boys.

In the latest edition of the musical gala, fans of BTS could see the idols on stage as part of a special performance of the song Old Town Road next to Lil Nas X . The public witnessed the incredible combination between these singers who united their musical styles and showed their talent.

Although almost a year has passed since this unexpected combination, the moment has remained in the memory of many. That’s why when the American singer and rapper met Jimmy Fallon online, the host asked him about the most special moments of that night and BTS came out in the talk.

Jimmy Fallon mentioned that that day had probably been crazy for the rapper and asked if he would make a new song with Bangtan Sonyeondan in addition to the show they presented at the GRAMMYs , to which Lil Nas X replied in the affirmative.

It is worth mentioning that rumors of a comeback for BTS have already started, so ARMY is getting ready to receive new tracks and more music. In the future, we could hear new collaborations of idols , including a song with Lil Nas X . Would you like these artists to meet again?

BTS was recently at the 2021 Golden Disk Awards and Suga gave a message that touched ARMY’s heart.

Look Behind The Scene Of “Lose You to Love Me” By...

How the cast reacted when Sandra Oh left the show